One vivid example of this came from my first ethics course, where the professor made the following argument: Suppose he agrees that killing animals for food is immoral. Whether it’s based on cruel factory farming methods or just a total belief that you ought not kill another creature without need, for the sake of this argument, that’s his position. Does it follow that he shouldn’t eat meat?

Although it seems as though it obviously should follow, it actually doesn’t. If he goes out and eats a hamburger the meat for that meal came from a cow that was killed and slaughtered in the past. The meat was sold, processed, sold again, shipped, and then prepared without any input from him. Nothing about ordering that burger from the menu has any causal relationship with the animal that died, because that was in the past. And it won’t cause any future animal suffering either, because there’s absolutely no way that the action of a single person eating a single meal could have any imapct whatsoever on the global meat industry. He hasn’t caused any harm in the past, and he hasn’t caused any harm in the future.

I think the whole class was pretty outraged by this argument. It seems blatantly hypocritical, and I believe most people would disagree with it. But the logic is sound. The problem is the idea that harm = morality. It simply does not. Another great example of this is the general attitude that voting–and voting in an informed way–is a civic duty. We tend to believe that either not voting or voting in an uninformed way is wrong. But what harm does it cause for an individual to do this? The probability that an individual will cause any harm is equal to the probability that that individual will cast a deciding vote which, in even state elections, is essentially a statistical impossibility. (Thus, the link between the categorical imperative and voting.)

Clearly, the issue of what laws we should support is an unavoidably moral issue. And, just as clearly, morality cannot be rendered objective by reducing to simplistic ideas of harm. If you ever debate a hot-button issue, you’ll invariably run up against some smug individual who decries your passion by stating that you “can’t argue from emotion”. True, but you can’t argue without it either.

But let’s look at the other side of the coin. During President Obama’s inaugural adddrsess, he said that “If there is a step we can take that will save even one child…, we should take that step.” This is the antithesis of chilly rationalism, and it’s just as misleading and dangerous. A friend on Facebook posted that quote, and then followed it up with a link to a list of all the children killed by American drone airstrikes in Pakistan and Yemen. The list, compiled by DronesWatch.org, comes from data provided by the the Bureau of Investigative Journalism.

I did some very basic analysis on that list because I’m an analyst and that’s what I do.

You can tell that the site is relying on a loose definition of “children”, since the median age of victims is 16, and the oldest are 19. (There were 122 total deaths, by the way, but 3 of them had no known age.) In the interests of being as careful with this topic as possible, I also considered the distribution of gender: 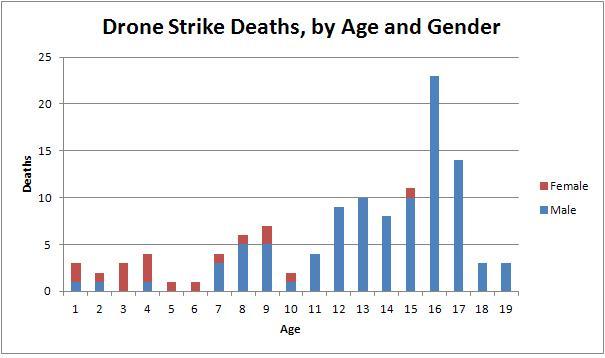 I’m skeptical that classifying all the 17-,  18-. and 19-year old casualties as children is completely accurate. Some of our soldiers are only 18 or 19. The fact that only a single female over the age of 10 was killed also seems to tell a story. Although I don’t know enough about the culture of Pakistan or Yemen to have any real certainty, I would guess that a lot of the male deaths over the age of 10 come from boys who are following older brothers, or cousins, or uncles, or even their fathers around. That would explain why more older, male kids are killed, but I doesn’t make me feel much better. An 11-year old is still a child, in my eyes, even if he is trying to help out in an armed resistance to the best of his young ability.

And none of this, of course, removes the tragedy of the truly young children who died. All of the children who died in Sandy Hook were between the ages of 6 and 7. There were 20 of them, 8 boys and 12 girls. There have been 18 victims of American drone strikes under the age of 7, 6 boys and 12 girls. What could we have done to save their lives? President Obama’s mantra seems to be that something must be done when our little children die, but if the little children of our enemies have to be killed, well that’s just the cost of American foreign policy.

This is a stark example, but it’s not the only one. There are about 30,000 auto fatalities every year. A lot of those killed are children. There’s a direct correlation between speed limits and traffic fatalities. Lowering the speed limits on all highways by 5mph would, without doubt, save at least one child’s life. No one has mentioned it. A lot of traffic fatalities are due to drunk drivers. Requiring ignition lock breathalyzers, requiring special permits to consume alcohol in public, or outright banning drinking outside the home would all save at least one little child’s life. Those aren’t near the top of anyone’s list either. 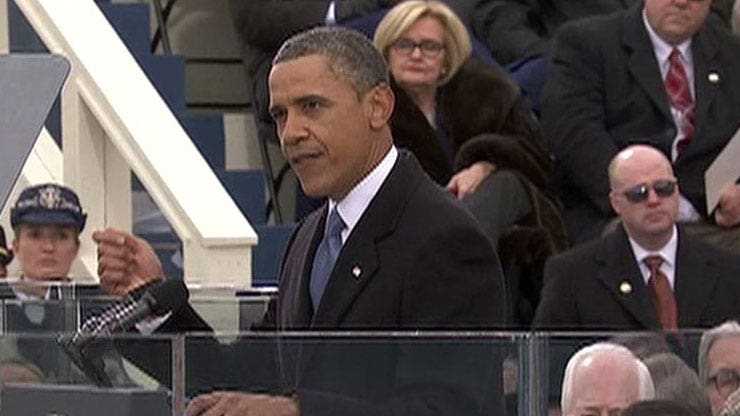 While it’s true that I’m generally skeptical of gun-control, I don’t want to confuse that debate with the point I’m trying to make in this post. I didn’t pick President Obama’s statement as the prototype of emotion-only policy because I’m trying to get in a dig at the Democrats. It’s merely a very prominent and very stark example of this kind total failure of rationality. In the previous paragraph you could easily see some parallels between the laws about alcohol and laws about guns, but it’s actually a very weak connection without working to specify the analogy between a beer and a handgun. I’m not going to do that work because this isn’t a gun-control post. (I’ll have another of those in the future.)

The point that I do want illustrate is simply this: If someone tries to tell you they are non-ideological and pragmatic, beware! Either they are trying to hide their ideology from you or–perhaps worse–they don’t even realize what their own ideology is. And if someone tries to tell you that their ideals are too precious for pragmatic compromise, beware!  Anyone who authentically believes in their ideals will be doggedly pragmatic. If you don’t care enough to learn how to move the real world towards your ideals, then they are not really your ideals.

3 thoughts on “To Save Even One Child…”