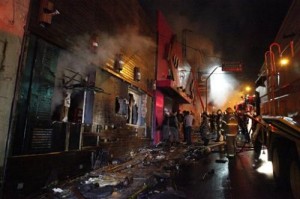 On Sunday a nightclub fire in Brazil killed 231 people. The nightclub was rated for a crowd of 1,000, but there were 2,000 inside when the fire broke out. Confused security guards initially locked the doors because they didn’t see the fire and thought people were trying to run without settling bar tabs. The insulation in the building released toxic smoke as it burned, confusing people and leading about 50 to cram into the bathroom, apparently believing that they had found an exit door.

When first responders enetered the building they were confronted with piles of bodies both in the bathroom and near the exist. There was complete and total silence… except for the ringing of cell phones. Many of the victims died from asphyxiation or being trampled, leaving their cell phones intact. Since only a few hours had passed, the batteries were still charged. And since word of the disaster had gotten out, anxious friends and relatives were calling, getting no answer, and leaving messages their loved ones would never hear.

This is the first time I’d heard of this happening, but according to a CNN.com article it’s actually fairly common:

The dead can’t speak. Their cell phones do.

And, for police, firefighters and paramedics, the incessant chirping, bleating and incongruously cheerful boom box beats of victims’ cell phones comprise a soundtrack of disaster.

It happened at the Virginia Tech shootings in 2007, a commuter train crash in Los Angeles the next year, the movie theater massacre in Aurora, Colorado, last July and, again, at the night club fire in Brazil that killed 231 people on Sunday.

The article, bearing the headline “Eerie sounds of cell phones amid disaster adds to first-responder toll”, explains that it’s not just a haunting image for folks reading newspaper accounts. For the first responders on the scene, it’s a genuine psychological problem:

The incessantly ringing phones and the realization that someone is desperately trying to reach someone else who is now dead, short-circuits the psychological defenses first responders need to do their jobs, said Jim Crabtree, a registered nurse who helps train them for the Los Angeles County Emergency Management Services Agency. 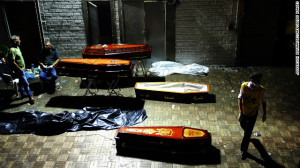 First responders at the Aurora shooting, where 12 peopel died, had to contend with a few cell phones. At the Brazilian nightclub there were nearly 1,000 cell phones ringing without owners, and one had already registered over 100 missed calls. There may be some glimmer of solace in the fact that 3 out of 4 of the discarded cell phones in Brazil actually had survivors (only 231, not 1,000 people were dead), but how do you balance that against the memory of a a cell phone ringing from inside a body bag?

First responers want permission to be able to turn off cell phones while they are doing their work, but according to policies written in decades past, this could technically be tampering with evidence. It will take new policies to address the problem–and new training to prepare first responders–and that will take some time.

It’s a 21st century problem, and we just haven’t figured out how to handle it yet.