We all eat a lot of mac-n-cheese in our lives. And yes, I mean the kind that comes in a box. You eat it when you’re a kid and then you eat it again when you have kids, thus completing the circle. (You might stop eating it when your kids are grown. I wouldn’t know.)  Now, if you’re anything like me, you’ve actually been making it incorrectly. Your eating sub-optimal mac-n-cheese, and this simply will not stand. Not only is there an intrinsic culinary cost, but there’s the additional philosophical strain of failing to live up to your fullest potential in the life-skill of mac-n-cheese creation. Mac-n-cheese may not seem like much, but if you’re going to do it then by all that is holy in this world you might as well do it right. (Something inside of me is concerned at the genuine outpouring of zeal with which I approach this topic, but I can not rationalize the trepidation and so I discount it.)

There are a few simple steps you can take to make the most of your macaroni and cheese experience. So, when I made my last batch this past weekend with my helpful children, I took some photos in order to share the wisdom I have learned. And so, without further ado, the secret to better-tasting mac-n-cheese.

The instructions on the back of the box will sometimes mention that butter is optional. This is a lie. It is not optional. If you want delicious mac-n-cheese, it is mandatory. If you want to eat healthily you’ve already done something wrong because, you know, this is food that comes out of a box. In for a penny, in for a pound I say. (Well, in this case, an entire pound of butter would be too much. Half a stick? Sounds about right.)

Instructions on the back of the box frequently mention cooking for 7 – 10  minutes. This is insane. If you cook for 10 minutes you will have nothing left but mush when you’re done. 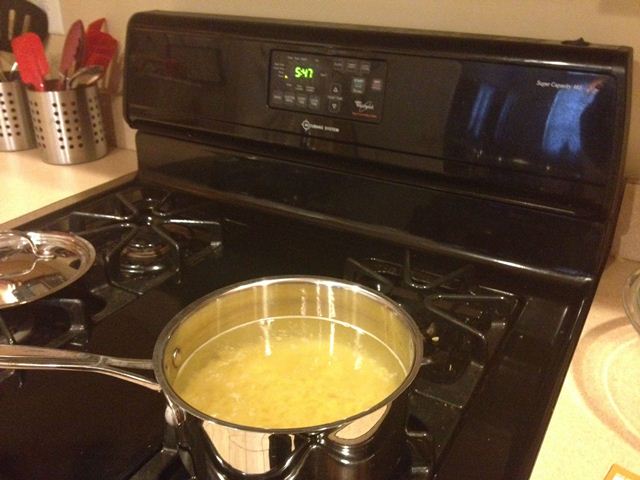 Notice in this pic that the timer reads 5:47 and the water hasn’t even started to reboil yet. This is  because I only started with 6:00 on the timer and I reduced the heat to medium-high for the duration of the cooking. And this might still be too much.

This is probably the most important step. You might have noticed that I had sliced the butter in the first step. Why would I do such a weird thing? The answer is that I want it to melt evenly. (I’m not sure if this really makes it less weird or not. I’ve sort of last my grasp of what constitutes “weirdness” and am cheerfully adrift without anchor, compass, or map. But I digress.) 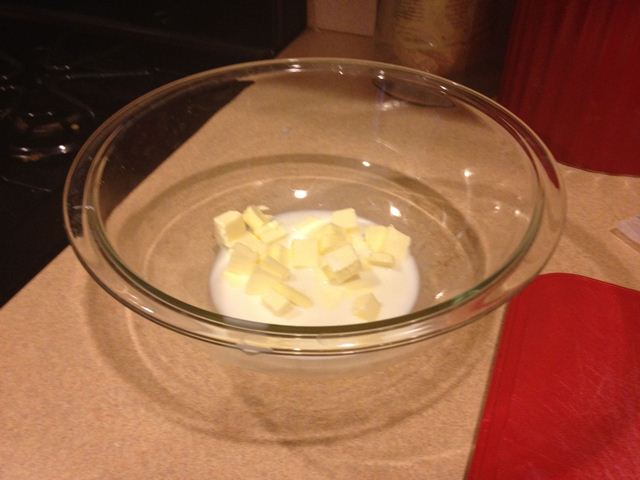 I’m working with a glass bowl here that not only microwaves nicely, but which is also large enough to mix the noodles in. This is important, because if you melt the milk and butter and then mix the sauce in a smaller bowl before transferring to a mixing bowl (or back to the pot) you’re going to lose some of the cheese sauce. Will it taste worse? I don’t know, but you’ll know that there is missing cheese sauce, and that will make it impossible to enjoy your meal. (Everyone else takes these kinds of concerns into account when cooking, right? Right?) 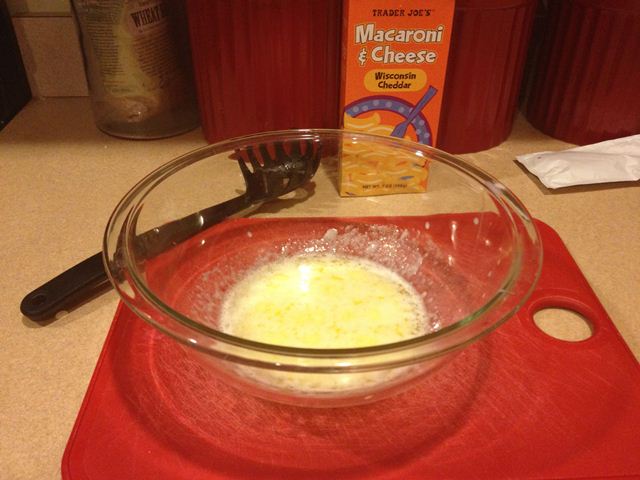 Here you see that the milk and butter are nicely melted. In my microwave this takes a little less than a minute. If you go all the way to a minute, however, you risk getting that weird foamy stuff that happens when you over-nuke the butter. I don’t know what it is, but it’s disturbing. It frightens me on an instinctual level, and so I avoid it.

Next stop? Add in the sauce and mix. 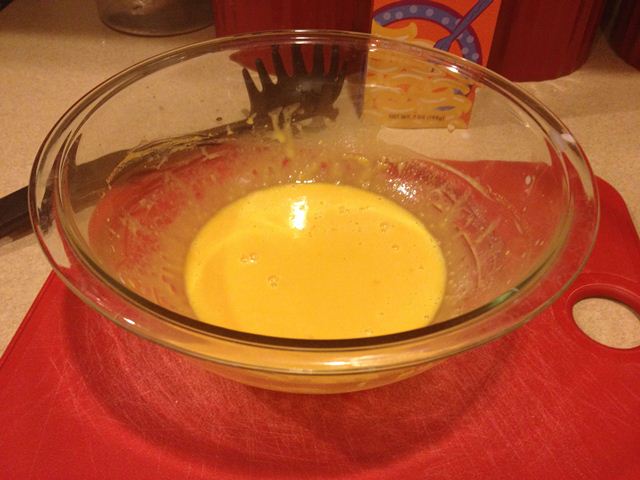 Look at that delicious cheese-sauce. Notice, most importantly, that there are no clumps. This is of vital importance! Clumps are terrible things, because they result in highly concentrated cheese sauce instead of an even distribution throughout. Although getting one of those little kernels in a spoonful might be a delicious surprise, there is almost (dare I say it?) too much cheese. In addition, there is once again the dire psychological toll of knowing that your cheese is unevenly distributed with respect to noodles. Your noodle-cheese distribution is heteroskedastic. And you don’t want a heteroskedastic noodle-cheese distribution, do you? No, of course you do not. No one wants heteroskedasticity all up in their mac-n-cheese. The invariable result of this sad scenario would be serious psychic strain that would severely undermine anyone’s ability to enjoy their meal. Luckily, with the appropriately vigorous application of a whisk to your melted butter, milk, and cheese sauce the tragedy can be safely averted. 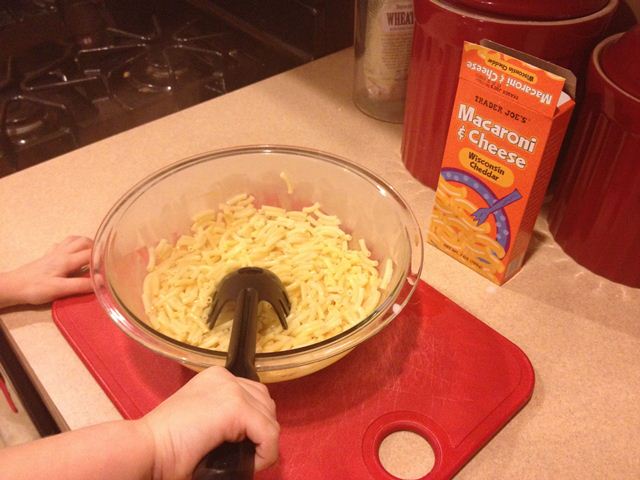 I would like to point out for the record that those adorably pudgy hands are not mine. They are my son’s, and he is 4, and at that age the pudginess is indeed adorable. At my age it would be disconcerting at best. In any case, you can see that by using the same bowl to premix the sauce and then add in the noodles, sauce wasteage has been kept to an absolute minimum. I run a tight ship when it comes to my kitchen! Or, at least, to cheese. Which is even more important than kitchens.

You are, of course, free to come up with your own methods in approaching your mac-n-cheese process optimization, but I believe that the goals are fairly universal:

No matter how you achieve the these objectives, I know that you too can enjoy the greater taste and–more satisfying than that–the deep security that comes with rigorously applying analysis and authenticity to all areas of your life, no matter how seemingly trivial.

In talking about this post with other folks (here and on Facebook), I realize that there are two additional points I left out. They are both related to saving time.

8 thoughts on “The Right Way to Make Mac-n-Cheese”