Photograph Brian Steel was born with fiber-type disproportion (a form of muscular dystrophy). The condition leaves him extremely weak, unable to lift or carry objects weighing more than 5 pounds, and with breathing difficulties. Despite this, Brian lives an independent life, and he grew tired of how others would judge him without getting to know what he wasn’t–and was–capable of doing for himself. 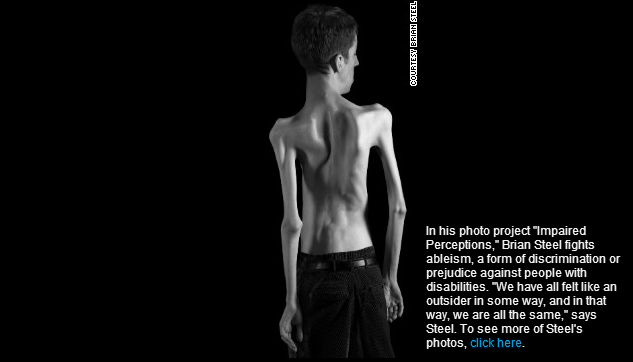 In a CNN article that has 8 images and an interview, Brian explained his motivation to photograph himself and others with disabilities:

Some of the people I photographed and interviewed for this project appeared to be perfectly able-bodied but actually have impairments that limited them physically. They are misperceived in a manner that is almost opposite to my experience. They talked about how judged they often felt because people could not understand why they weren’t doing certain things that required more physical effort.

On the other hand, I met people who had experiences where people felt compelled to help them because they were in a wheelchair, but those individuals are fully capable and have accomplished more than a lot of their able-bodied peers.

My point is not to say that one group is better than the other but rather that you simply can’t know what someone is capable of without getting to know them.

I think this is a good message, but whenever I read articles like this I think of another one. At a time when 90% or more of unborn human beings with a diagnosis f Down syndrome are aborted, I’m afraid our society is in denial of the fact that we, individually and as communities, need these people in our lives. While some with disabilities may depend on us for physical and medical support, we rely on them to remind us of what it means to be human. It’s not about what we have–whether it’s health, comfort, friends or family–but it’s about out struggle to attain those things for ourselves and others.