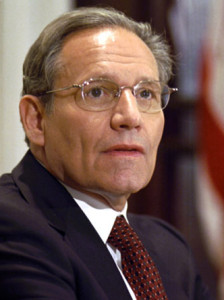 So… the sequester showdown is coming. I haven’t written much about it because I hate politics more with every passing hour and I wish a pox on both houses. Fervently. But I’ve been fascinated by the reporting of Bob Woodward. From the Washington Post four days ago:

My extensive reporting for my book “The Price of Politics” shows that the automatic spending cuts were initiated by the White House and were the brainchild of Lew and White House congressional relations chief Rob Nabors — probably the foremost experts on budget issues in the senior ranks of the federal government.

Obama personally approved of the plan for Lew and Nabors to propose the sequester to Senate Majority Leader Harry Reid (D-Nev.). They did so at 2:30 p.m. July 27, 2011, according to interviews with two senior White House aides who were directly involved.

And then yesterday via CNBC:

The Obama administration is now fighting back against the best-selling author who made his name and reputation in reporting the Watergate scandal that led to the resignation of Richard Nixon. And it’s revealing what they’re not challenging—the miasma of bad faith with Republicans over the budget and the $85 billion in sequestered budget cuts expected to begin on Friday.

I think it’s important information to understand that the sequester originated with President Obama because when the President of the United States lies to the nation about an important issue people should know. Right now the Democrats are basically betting that the GOP will be blamed for the sequester and they are relying on a friendly media to  bolster that impression. But the Republicans–no paragons of virtue or common sense among the bunch–seem to think the Democrats have overreached. Or maybe they are just having a temper tantrum. I don’t know.

I just know that no good can come of serious policy debates mired in falsehood and bad faith, and right now that’s what we’ve got. Thanks to both sides. I wish I had more to offer, but these days I don’t. The problems facing are nation just aren’t that hard. Any number of alternative solutions could be a substantial improvement, but as long as the public treats it like a game of football I don’t have a lot of hope for that.

7 thoughts on “Bob Woodward: Obama and the Sequester”