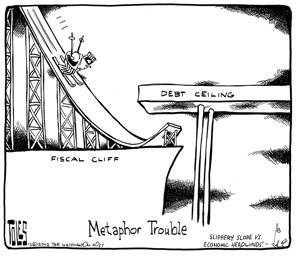 In an editorial for the Washington Post, respected tax economist Martin Feldstein lays out a plan for helping to balance the budget that is so sensible and effective it has little chance of survival in Washington. (I called him “Marty” because that’s what Joel Slemrod, one of my professors at Michigan, always called him.) The plan is simple: instead of trying to eliminate the major tax expenditures (like the mortgage interest deduction), just cap them. He suggests a cap that is based on a percent of AGI (adjusted gross income, which is roughly speaking the amount you start from when calculating what you owe in taxes). This would spread the impact of the cap across all tax payers, but of course the rich would pay much more because they have a much higher AGI.

The plan would raise about $140billion in 2013. By contrast the President’s plan–which is also based on limiting tax expenditures but focuses only on those who make more than $200,000–would raise about $21 billion. Over the next 10 years, Feldstein’s plan would raise $2.1 trillion. President Obama’s would raise $300billion. Feldstein claims that the Obama plan isn’t fair, but I don’t think that’s the strongest argument. The stronger argument is that there’s only but so much cash you can raise if you focuse on the rich. Households making more than $200,000 / year are just a small fraction of the population, and if you include only individuals making $200,000 / year there just aren’t enough of them to raise significant revenue. That should be obvious from the numbers: Feldstein’s plan raises 7 times the revenue, but it does so by applying the tax to about 30 times the population: in other words, the rich still pay much more per-person on Feldstein’s (which is as it should be). Feldstein’s plan is also fair because, by capping deductions, it specifically limits the rich from being able to use expensive attorneys to circumvent the tax code.

The plan should be palatable to both parties. For the Republicans: it moves us towards a balanced budget without increasing tax rates. For Democrats: it increases revenues and makes the tax code more fair (by preventing the rich from being able to avoid taxation). I also like it because a cap on deductions is a necessary first step towards eliminating deductions. I’m not sure if all deductions should be eliminted (Feldstein specifically exempts charitable giving, for example), but most of the big ones (mortgage interest and health care) absolutely should be eliminated. Eliminating the deductions all at once would be too traumatic to our economy, but capping them is a great first step in moving towards a gradual elimination.