So Vulture reports that Dinesh D’Souza is making a new movie. I really, really wish he wouldn’t. 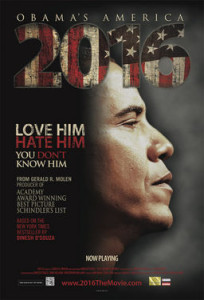 His last movie, in case you missed it, was 2016: Obama’s America and it is a perfect example of what happens when the American right decides that Michael Moore is a really awesome guy and theywant to be totally just like him. In fairness, I did not watch the movie. I did, however, have the misfortune of reading the entire book upon which it was largely based: The Roots of Obama’s Rage (also by Dinesh D’Souza). It was an educational experience, but not in the way that D’Souza probably intended. The central premise of the book is that Obama is suffering from an acute case of absent-father syndrome, and therefore he has become the spiritual reincarnation of his father’s exact politics. The problem with that, of course, is that if Obama Senior was totally absent from his son’s life, how did he manage to pick up his politics? It’s not as though his precise brand of anti-colonialism was readily available on bookshelves. The only way Roots of Obama’s Rage makes sense as a narrative is if you believe in literal ghosts (which, if you read the book, might actually be what D’Souza is saying).

The mangled thesis isn’t the worst crime of the book, however. The intentionally belligerent tone is. D’Souze quite deliberately hurls as many racially insensitive terms as he can, including some of his own invention. For example, his term “lactation man” (meaning: “a person who makes things white”) impresively manages to be both sexist and racist at the same time! At least Ann Coulter tries to be funny and clever (guilty admission: sometimes I think she succeeds). D’Souza’s provocative prose is just ugly.

So the near media blackout surrounding the film’s release struck me as a blessing. This is not a right-wing documentary you want to bring home to meet your parents. Depressingly, however, the film did astoundingly well. Only three documentaries have ever pulled in more than the $33,449,086 that D’Souza’s film scored: a Justin Bieber documentary, March of the Penguins, and Farenheit 9/11. At over $100,000,000, Michael Moore’s haul is impressive, but his film opened up in over 800 theaters, and Obama’s America opened up in 1.

The next installment is scheduled for release just before the 2014 midterm elections. I can’t wait.

In another example of conservatives behaving badly, I’m flabbergasted at the way the following Cruz / Feinstein smackdown has been making the rounds among my right-of-center Facebook contacts and in the blogosphere. The video of the exchange between the two senators is here, and the conservative take on it is summarized with images like this one: 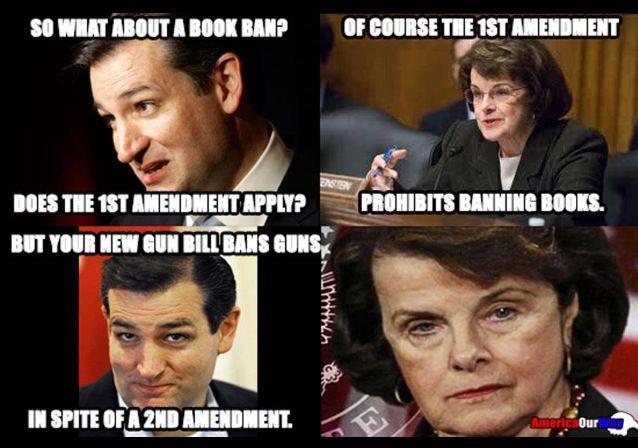 Here’s the problem: if you actually watch the video, Feinstein completely obliterates Cruz. I’m embarassed for him, and I’m even more embarassed that he doesn’t seem to see how badly he’s in over his head. Not only does Feinstein drop the hammer on him in terms of rhetorical prowess, but his central point is pointless (“You can’t limit rights! Ever!”), and someone helpfully hands Feinstein the perfect counterexample. So the debate goes something like this (paraphrasing):

Cruz: You want to ban some guns. The First Amendment protects free speech. Do you think the government can choose to ban some books?

Cruz: Uh… So… what about the Fourth Amendment?

Feinstein: You’re not very bright, are you?

Cruz: You can’t ban any guns!

Feinstein: Really? No limits at all? Bazookas should be for sale out of vending machines?

Someone should have taken away Cruz’s shovel, ’cause no matter how deep the hole got he just kept digging. This is a man who is considered a serious contender for the GOP slot in 2016? Really?

Here’s why I bring this up: using bad arguments just because they have a conclusion you like is bad enough as a matter of principle, but it’s absolutely criminal as a matter of politics. If you really care about the things that you say you care about, then you ought to care about practical consideratiosn like, I don’t know, whether or not policy shifts towards the ideals you care about. Intentionally lying or otherwise cheating to try and get policies you like enacted is obviously immoral, but this isn’t one of those tough realism vs. idealism conundrums. When you shut down stupid arguments, you get to have both. For free. It’s win-win.

Maybe I’m wasting my keystrokes here, but I have to believe that there are more sensible people who have, among their ideals, considerations like “common sense” and “intellectual honesty”. Unfortunately, I think these folks–who are better at compromising in principled and productive ways and less likely to buy into absolutism and extremism–tend to be rather quiet. They have self-doubts, their positions are moderate, and they don’t view politics like a spectator sport.

According to Moral Foundations Theory, conservatives see a wider range of moral considerations than liberals. In a nutshell: the American left sees only individualistic considerations like harm and fairness, while the American right sees those considerations but also loyalty, authority and purity. The wider spectrum of moral consideations is a big part of why I consider myself on the American right (some mix of classical liberal, right-libertarianism, and conservatism). Some kinds of loyalty are noble or at least good fun. There’s a place for loyalty. That place is below truth. Truth always has to come first, whether we’re talking about the fact that Dinesh D’Souza is making up stories that don’t even make sense, that Senator Cruz made an ass out of himself when he tried to take on Senator Feinstein, or the fact that sports stars get away with rape and abuse.

The answer to all this is so simple I’m not sure it can work, but I’ll go ahead and say it.

Stop it. Stop it right now.