The last three posts have not been fun to write. I don’t regret for a second the time I spent writing them, but I also need to preserve my sanity by looking away from the abyss from time to time. So I’m happy that we’re going to go far, far away from the topic of politics and talk about an absolutely amazing record that you have to hear to belief. Because trust me, the description sounds too bizarre to be real. What we have is a loving homage to spaghetti western soundtracks that brought together producer Danger Mouse and Italian composer Daniele Luppi along with Jack White and Norah Jones. It’s the kind of record you could only possibly hear about from NPR.

What’s that, you say? Pics or it didn’t happen? 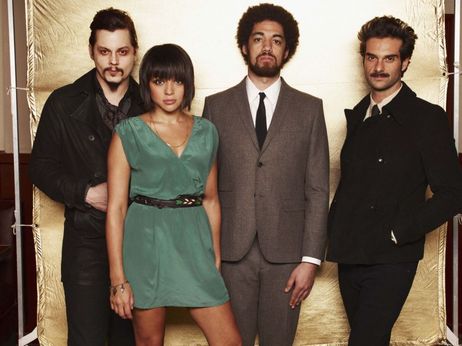 When I first heard the description on NPR, I knew that I had to listen to the music. A few months later, when I got Spotify Premium, I was incredibly happy to find that the album blew away all my highest expectations. Every single song on it is great. And unique. And yet the album is cohesive. Look, I’m not a music reviewer. I’ll just tell you this: I love to travel as much as the next guy, sure, but I’m basically a hobbit. I love to have my home, and to go on adventures but then come back. But when it comes to music? My desire for new sounds that take me to new worlds is, as far as I can tell, insatiable. And this blend of instrumental and vocal tracks is just perfect for me.

So let’s get to the music.

That’s “Two Against One” (Jack White, obviously), and it’s got excellent lyrics like “I keep my enemies closer than my mirror ever gets to me” and “There’s only three, you and me against me… I’m already fighting me, so what’s another one?”. Recasting bravado into a context of inner turmoil is exactly the kind of unexpected new combination that I can never get enough of. It’s like the audio equivalent of Firefly or Cowboy Beebop. Yes, please . (There’s an animated version of the video, but it was too distracting for me to use in the post.)

But let’s not leave Norah Jones out, oh no! That simply would not do. Not at all.

Apparently the fourth season finale of Breaking Bad used that track, but I don’t watch the show so I wouldn’t know. I just know it’s awesome. And now you do.

And, after this week, that’s something I know I could use.