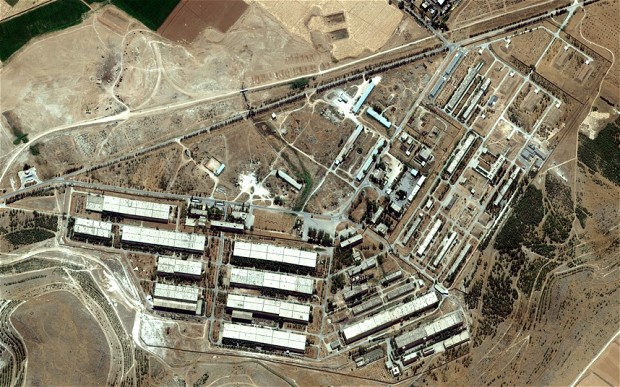 Set amid the rolling plains outside Aleppo, the town of al-Safira looks just like another vicious battleground in Syria’s civil war. On one side are lightly-armed rebels, on the other are government troops, and in between is a hotly-contested no-man’s land of bombed-out homes and burned-out military vehicles.

The fight for al-Safira is no ordinary turf war, however, and the prize can be found behind the perimeter walls of the heavily-guarded military base on the edge of town. Inside what looks like a drab industrial estate is one of Syria’s main facilities for producing chemical weapons – and among its products is sarin, the lethal nerve gas that the regime is now feared to be deploying in its bid to cling to power.

That would be ominous enough, but then there’s this:

Among the rebel lines in al-Safira flutters the black flag of the al-Nusra Brigade, the jihadist group that recently declared its allegiance to al-Qaeda. Known for their fighting prowess honed in Iraq, they are now taking the lead in nearly every frontline in the Syrian war, and earlier this month, pushed to within just over a mile of al-Safira, only to for the Syrian troops to regain the ground last week.