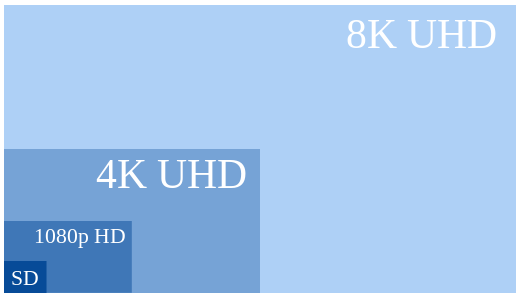 The 65″ model is going to set you back about $7,000, but–aside from the facts that I don’t have $7,000 to spend on a TV and that even if I did my wife would kill me for it–there are a couple of problems. First: the 4K Ultra HDTV is only one of two standards under the “Ultra HDTV” moniker. The other is 8K Ultra HDTV (I’ll let you figure how many pixels that one has). So if you bought the 4K, would you end up sort of like those folks who bought the 720p HDTVs before the 1080p HDTVs became standard? Even more importantly: what are you going to watch on this monstrous display? There’s not a lot of content available at the resolution. The only thing I found was TimeScapes which, while cool, doesn’t seem to justify a brand new computer.

But what I’m really curious about is when TVs will finally move to a display standard that makes sense, like the Apple Retina Display. The idea there is that it’s not the number of pixels that matter, it’s the size of the pixels relative to the distance you are from the screen. Once you can no longer visually recognize pixels at a normal viewing distance, adding more pixels gets silly. It’s just a nice, simple number that marketing guys can emphasize to sell their product, although a lot of other things (like color fidelity, brightness, and contrast ratio) matter a lot for making a screen look good.

Wikipedia has more, if you’re curious.