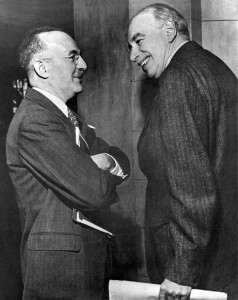 This is a fascinating article from The American Conservative (never heard of it before today) which struck me on many levels. First of all, I’m fascinated by the idea that the world is not the way that we think it is, and Ron Unz provides several real-world examples of this. They are startling, provocative, and credible. For example, he cites the appearance of Harry Dexter White to represent the United States in the formation of the Bretton Wood’s sytem (the system of international monetary finance erected after World War 2). The problem? Harry Dexter White was a Soviet spy. So were hundreds–possibly thousands–of highly-placed American officials in the years after World War 2. Now that the Cold War is over this is less controversial and therefore easier to prove, but it’s still a fact that most Americans are totally ignorant of. Old Joe McCarthy might have gotten a lot of this specific charges completely wrong, but it turns out that the general thrust of his argument–that the United States was riddled with communist infiltrators–was absolutely correct.

From there, Unz goes on to suggest that there are present-day examples of this kind of complete blindness to reality-as-it-really-is, and specifically that this is a result of the American media refusing to cover certain stories. We’re clearly treading close to conspiracy-theory territory here, but I was surprised that Unz’s chosen examples (he has three) seemed credibly substantiated, plausible, and were completely new to me. No Truthers or Birthers here.

So what causes this selective, bipartisan media blindness? There’s the danger of suggesting the New Illuminati or some such are behind it all, but once again Unz manages to stay on the sane side of the fence. He writes:

A likely reason for this wall of uninterest on so many important issues is that the disasters involved are often bipartisan in nature, with both Democrats and Republicans being culpable and therefore equally eager to hide their mistakes. Perhaps in the famous words of Benjamin Franklin, they realize that they must all hang together or they will surely all hang separately.

Explanations based on pervasive incentives are much, much more compelling than explanations requiring a secret cabal (for reasons I won’t go into in this post), so Unz’s case argument continues to appeal to me as plausible. And then comes the last paragraph:

Consider the fascinating perspective of the recently deceased Boris Berezovsky, once the most powerful of the Russian oligarchs and the puppet master behind President Boris Yeltsin during the late 1990s. After looting billions in national wealth and elevating Vladimir Putin to the presidency, he overreached himself and eventually went into exile. According to the New York Times, he had planned to transform Russia into a fake two-party state—one social-democratic and one neoconservative—in which heated public battles would be fought on divisive, symbolic issues, while behind the scenes both parties would actually be controlled by the same ruling elites. With the citizenry thus permanently divided and popular dissatisfaction safely channeled into meaningless dead-ends, Russia’s rulers could maintain unlimited wealth and power for themselves, with little threat to their reign. Given America’s history over the last couple of decades, perhaps we can guess where Berezovsky got his idea for such a clever political scheme.

Now, if the argument was that Berezovsky was trying to imitate an older American conspiracy, e.g. that someone had already done in America what Berezovsky hoped to accomplish in Mother Russia, then we’ve got a problem. But I don’t think that’s what Unz was saying. (Being coy about it probably keeps his readership a little higher, however.) Instead, I think his point is that the American system has evolved into this unfortunate predicament, and Berezovsky wanted an astroturf version of the authentic American political quagmire. It didn’t work, no, but it highlights just how vulnerable America is to being fleeced by those who recognize the superficiality of the differences between the parties.

The question, of course, is what to do about it. And that’s one of the things I’d like to get comments on. (I’d also like a sanity-check on some of his three examples of media stonewalling. Anyone got any info on those?)

I don’t buy the naive idea that our 2-party system is to blame, as though a parlimentary system would solve our problems. I do think that the problem is structural rather than political, however. I think that the best solutions to the false fight between D and R involve nerdy reforms to our system that are unlikely to have any obvious connection to the problem. For example: I’d love to see an end to all gerrymandering, or at least a requirement on the shape of congressional districts that hamstrings the creativity of gerrymandered districts. Creating truly “fair” districts is hard. Constraining the amount of crazy, however, is easy. (That’s a link to various methods of establishing objective criteria for measuring gerrymandering. None of them are perfect, but any of them could be used to put a lid on the current problem.)

Another reform that I’d love to see would be the implementation of instant run-off elections. Right now we have what are called “first pass the poll” elections, which means who ever gets the most wins. This encourages what’s called “strategic voting”. Strategic voting is what forces people to vote for candidates they don’t really like because they think the candidate has a better chance of winning, and the result is that it puts tremendous power in the hands of political parties. A couple hundred years ago these political parties weren’t as sophisticated and there really weren’t any other options, so that made sense. Today, we can easily implement instant-run off elections and the parties are much more powerful, so we should. (In an instant run-off election, you vote for everyone on the ballot by ranking them in order of preference. The short version of this is that it means everyone can honestly put a third party candidate first if that’s who they really want to win, then put their “safe” choice second. So: no more strategic voting.)

Here’es another simple reform: create a lottery to determine the order of states in the presidential primary. The only reason we continue to have such a stupid policy as corn-ethanol subsidies (not to mention government hand-outs to agri-business in general) is that Iowa is an early voting state. This is insane. The logical thing to do is to just draw straws or something every four years to see what order the states get to go in.

None of these reforms are sexy. None of them are political. But all of them would, I think, have a significant and material impact on fixing our political system. Once we fixed the system, then we could maybe have a shot at getting some fixes implemented for some of the political problems. (Like reforming our idiotic tax or immigration codes.)

What do you think?

6 thoughts on “TAC: Our American Pravda”