So the news is in: Mark Sanford has won. He has, as CNN describes it “completed his political comeback”. I’ve got some pretty strong feelings about this result, and none of them are positive. 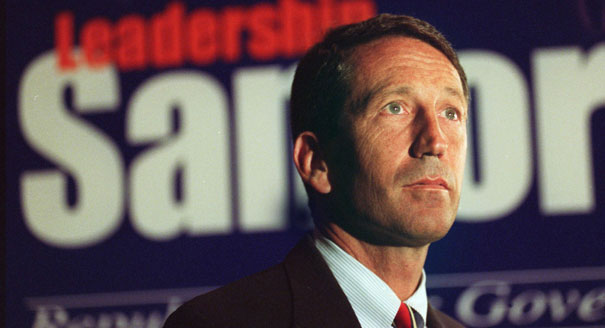 As I wrote just over a month ago: People deserve second chances; politicians don’t. This might not seem fair, but it’s prudent. Allowing scandal-tainted politicians to grovel a bit and then get right back on the horse as though nothing had happened doesn’t show that Americans are a forgiving people. It shows that Americans are a stupid people. Rather than treating every idiot politician on a case-by-case basis, we should just be paying attention to the unwritten rules and expectations we have in place of our politicians. And right now those rules are, basically, “Anything goes. If you get caught, you might have to say “sorry”, but you can just come back after a while like nothing happened.”

Well guess what, my fellow Americans, if those are the rules for being a politician then we’ve got no one but ourselves to blame when politicians live down to those low, low, low expectations. Two additional points:

First, this is worse for the Republicans. I don’t think there’s a great example of misogynistic hypocrisy in American politics than Bill Clinton and the fact that he continues to be honored and revered by the American left ought to be a scandal. But it isn’t and it won’t be. Whining that the game is rigged is pointless and, what’s more, the GOP has carved out the “family values” corner for itself. The GOP made that bed, and now they need to lie down in it. And that means that when someone is as egregiously and wantonly anti-family values as Sanford they do not get a second chance. The fact that he won against a Democrat is annoying, but the fact that he got on the GOP ticket is an outrage. Sometimes compromise is necessary in politics, but not this kind of compromise. Better to have run a weaker candidate and risked losing than to parade around nationally making a laughing stock out of your own brand and your simpleton voters. Short run? We kept a House seat. Long run? Another nail in the credibility of the GOP.

Second, others might buy the whole public life / private life dichotomy, but in most cases it simply doesn’t apply. It doesn’t apply to Bill Clinton because he was abusing the power of his office. There’s nothing “private” about seducing young interns in the Oval Office. And it doesn’t apply to Sanford either for this simple reason: marriage is not a private arrangement. It is a public one. That’s why we have weddings. It’s why we have marriage licenses. Your relationship with your girlfriend? Private. Your relationship with your mistress? Private. Your relationship with you bff? Private. But when you decide to get married, you are making a public commitment not just to your spouse, but more importantly to the community at large. You and your spouse are promising to the community that you will be faithful to each other and take care of each other and take care of any children you have, thus becoming not individuals, but a family unit. Obviously interpersonal relationships are private affairs, but marriages are more than just interpersonal relationships.

The reality is that I would still have no tolerance for a politician who cheated on his unmarried partner because I don’t believe that having liars and cheats run our government is a good idea. I believe that we ought to seek people of character. But even if you don’t agree with me on that, even if you subscribe to the theory that a liar is fine as long as they are good at their job, you still have to face the reality that cheating on your wife is not merely a breach of private confidence, is a violation of a public contract with society.

Sanford’s private journey of redemption (or not) is between him and God. His attempts to rescue a relationship with is children and family is his concern. I wish him the best on both counts. I’m not vengeful or judgmental. I don’t have anything to say about how good or how bad of a person Sanford is relative to me or anyone else. I’m just talking about standards for our civil servants, and the quaint notion that we should have some.