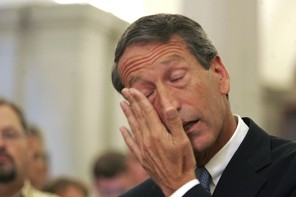 The former South Carolina governor, who ended his term tarnished by one of the most sensational political sex scandals in recent memory, has won the Republican primary to become the party’s candidate for the U.S. House seat he represented in the 1990s.

I have a beef with this.

Forgiveness is an important part of life, and I believe in giving people second chances. But what’s admirable on a person-to-person level can create warped incentives on a systemic level. The American voter’s willingness to forgive and forget when it comes to political scandal create a toxic environment where integrity–which is costly to people who try to live with it–is devalued.

I have nothing against Sanford and I don’t want to throw stones, but I don’t want to hand him a seat in the US House of Representatives either. Obviously that decision lies ultimately with the voters of South Carolina, but I sure wish they’d have some better sense. You want to know why we can’t find any honest politicians to represent us? This is why. Politics naturally attracts egotistical, impulsive glory-hounds, and so if you want to screen them out (or at least discourage them a little bit) you’re going to need a system that has stiff penalties for wantonly dishonest behavior. More importantly, you need those punishments to go through regardless of how sorry or sympathetic the perpetrator is. If the public takes back misbehaving politicians and gives them a second chance then the threats of punishment are not credible and therefore can have no deterrent effect. And if there’s no deterrent effect against lying and cheating, what kinds of people do you think will come to dominate the system?

That, alone, is enough for the voters of South Carolina to give a resounding “denied” in response to Sandord’s newest job application. But wait, there’s more!

The fact that Sanford is a conservative Republican plays perfectly into the Democratic narrative that social values is just a code word for entrenching the interests of the patriarchy. Yeah: gays can’t get married, but Sanford can abandon his wife and children and all he has to do is say “sorry” before he gets his old House seat back. Really? In light of that, all his God-talk is very obnoxious:

It’s been a very long journey. And in that journey I am humbled to find ourselves where we find ourselves tonight… I want to thank my God. I used to cringe when somebody would say, `I want to thank my God’ because at that point I would think this is getting uncomfortable. But once you really receive God’s grace and (have) seen it reflected in others you stop and acknowledge that grace and the difference He has made in my life and in so many lives across this state and across this nation.

I’ll  be perfectly honest: I think he’s lying. I think someone who truly understood repentance would have more sense than this. But regardless of his sincerity, the GOP needs to pick between “supporting rich old white guys” and “supporting family values”. Earth to the Republicans: those two phrases are not synonymous. Acting as though they are–as if the interests of the rich old white guys were equivalent to the interests of families–is exactly why so many people can’t take social conservatism seriously.

And lastly, let me address the old “I don’t care what they do in their private lives” approach. Here’s a newsflash: marriage is not your private life. Obviously there are aspects to family life that are intensely private and personal and none of our business whatsoever, but the vows that spouses take are public vows. Marriage is not a private bond between two individuals. It is a public institution that creates an agreement between the spouses (to love and protect each other) and society (to give their union special status). Breaking those vows is not a purely private matter. That’s why we have weddings.

So yeah: Mark Sanford is on his comeback. He’s the underdog now, I guess. The anti-hero.