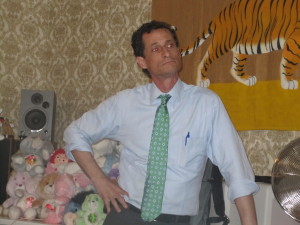 I was pretty disgusted to see Mark Sanford’s return to politics from his well-earned disgrace, so I’m impressed that New York Democrats seem a lot less forgiving of Anthony Weiner’s ploy to resurrect his own career, at least according to this article from Politicker. Speaking at a New Kings Democrats candidates forum, Weiner got some incredibly harsh words in the open question period. My favorites came from Jess Strauss, who opened by pointing out that “three candidates in a row–mayoral candidate John Liu, Brooklyn borough president hopeful Eric Adams and Mr. Weiner–had all come to the Democratic club and apologized for something.” Weiner tried to turn the tables on Straus, asking who he supported, but:

Mr. Strauss interjected, arguing that the club’s goal was to bring new people into the political system. “It is very difficult for us to do that when he have politicians out there who are behaving this way,” he said.

The folks who attacked Weiner all support other candidates, but I’m not sure if that really means anything in this case. I mean, if their opinions about Mr. Weiner are perfectly honest, they would support someone else, wouldn’t they? As for Weiner, he seems as arrogant as ever:

“I’m going to win this election, OK, and I’m gonna govern this city really well,” he declared. “If you don’t think I should even be standing here today, I certainly would respect that. I mean, you’re supporting another candidate who’s not gonna win.”

It was really frustrating to watch Sanford win. I’d really love for Weiner to lose. I mean, the American people have got to draw the line somewhere, right?