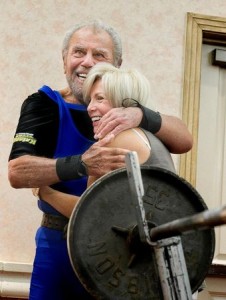 When I was in high school I wasn’t much of an athlete. I did track one season, but I was already a junior and my only real motivation was that I had a friend (a real runner) who always told me how awesome running was, and I wanted to give it a try. I had some good experiences even if they weren’t exactly fun experiences, like getting passed by injured runners during the first practices, winning junior varsity events that I probably wasn’t supposed to be competing in as a junior, and once getting thrown into a 4X100 varsity race because I joked that I was fast when coach asked who wanted to replace one of the real athletes. I had never even practiced handing off a baton and didn’t know where I was supposed to stand. I didn’t take off fast enough for my hand-off (I was third), and got a friendly shove-from-behind. Good times.

But one of the reasons I never really tried that hard was because I figured that when I was a teenager good health was just a gift. Later on in life, it would be harder. I know that if I really pushed myself hard at something I would probably peak in my teens or early 20s, and then spend the rest of my life in a slow decline. That just sounded incredibly depressing. I also just wanted the kind of life where, at 30 or 50 or 70 years old, I would be willing to make big changes, take up something unknown, and try to learn new skills.

And that’s why Sy Perlis is my hero. It’s not just that, at 91 years old, he just set a world record bench press. It’s that he didn’t start weight-lifting until he was in his 60s. Now that is what I’m talking about! I’m not saying I want to push everything off until then–I’m working hard on my running now in my 30s–but I just love that attitude. I hope I’m as healthy and strong as he is at 91, but I also hope that along the way I’m as willing as he is to get started.

USAToday has the story and video.