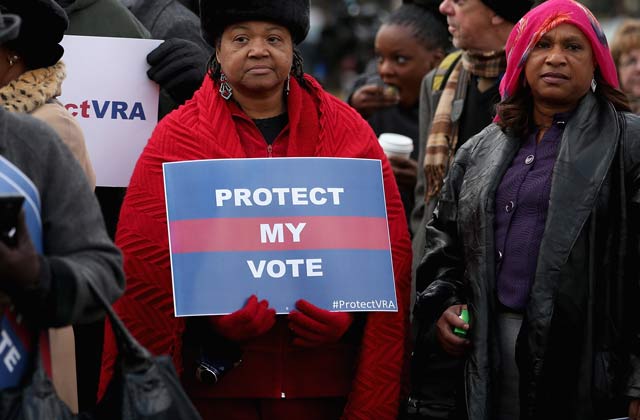 Right now everyone’s talking about the SCOTUS decisiosn overturning DOMA and (effectively) Prop 8, which is understandable, but I don’t like talking about what everyone else is talking about so I’m going to talk about the decision that was making headlines before the gay-marriage decisions: the gutting of the Voting Rights Act.

For those not paying attention, the Court (by a 5-4 margin, again) struck down the provision of the VRA that required certain states (mostly in the South) to run any proposed changes to voting by the Department of Justice for review first. Of course there is the usual liberal willful blindness on this one. Rather than see that Southern states chafe under federal intervention (just as Western states are annoyed by how much of their land is owned by the Feds), they see nefarious schemes for intentional racist oppression. The worst of which, as far as I can tell, comes down to requiring photo IDs, which is something that developed democracies in Europe require as a matter of course (this Foreign Policy mag referred to the US system as “trust based”).

The actual rationale of the Court, by the way, is as follows:

At the same time, voting discrimination still exists; no one doubts that. The question is whether the Act’s extraordinary measures, including its disparate treatment of the States, continue to satisfy constitutional requirements. As we put it a short time ago, “the Act imposes current burdens and must be justified by current needs.”

So, while I think it’s sad to see liberals inhabiting an imaginary world where every Republican goes to bed every night trying to come up with ways to oppress black people, this isn’t unusual. (And the same kind of demonization takes place in the opposite direction, so it’s not like it’s a partisan foible either.)

No, what bothers me is the way that race is becoming politicized. Back in the very bad old days (the 19th century) there was this idea that “race” was a genuine, scientifically-valid differentiation between different kinds of human beings. Sort of like how there are an estimated 22,000 species of ant (only 12,500 have been identified), there were 3 or 4 species of human being. (Fun fact: at a scientific conference in New Orleans near the end of the century, a paper was given that seriously proposed Mormons as a new race. Since Mormons had been around for less than a century, the scientists had to also propose a special form of ultra-fast devolution to explain how this new race had emerged so quickly. So, that’s cool.)

This wasn’t the first use of the word “race”, by the way. Originally it just meant “nation”, but after Darwin folks got very excited and decided that it was scientifically valid to subdivide humans into different biological buckets. Only, as it turns out, it’s not. Modern genetics have shown that there’s basically no connection between the genetic determinants of physical features associated with race and anything else that really matters, which means, and I’ll trust Wikipedia on this one: “All living humans belong to the same species, Homo sapiens and subspecies, Homo sapiens sapiens.” (Wikipedia)

And you know what that means? It means “race” is something humans invented and that we perpetuate as a consequence of our behavior. Races remain separate because we consider them valid, not because they intrinsically are. And, just as race used to mean “nationality”, then meant “biological subdivision of the race”, we keep changing the definition. Now it means some nebulous, fuzzy constellation of things that include physical characteristics, but also behaviors and preferences. Thus it can be said–and was said by some–that President Obama wasn’t black because his family had not arisen from the culture of African Americans who had been originally brought to the US as part of the slave trade. He was, in a cultural sense, not really black. And if a young African American kid exhibits the wrong kind of behaviors, then he’s “acting white”.

But here’s the worst innovation in the definition of “race”: If you’re a black Republican, then you’re going to get called “Uncle Tom”, even by a white guy. Sure, Rep Wrinkler got called for it and apologized, but that’s as far as it’s going to go because, fundamentally, if a black is a Republican it’s pretty damn common to question whether or not they are truly black. RGIII has faced the exact same problem. An ESPN commentator (this time a black guy) questioned whether or not RGIII was legitimately black, saying:

Is he a brother, or is he a cornball brother? He’s not real. Okay, he’s black, he kind of does the thing, but he’s not really down with the cause. He’s not one of us… We all know he has a white fiancee. There was all this talk about how he’s a Republican.

Catch that? Sin #1: dating a white woman. Sin #2: rumors of being Republican. I guess Parker was just waiting for a third strike to officially expel RGIII from blackdom. And yes, like Rep Wrinkler, Parker got called on his actions, but that’s mistaking the symptom for the disease. And the disease is that part of the definition of “black” in 21st century America is “Democratic”.

This is like the nuclear option for race relations, but it’s happened gradually so no one has noticed it. What this means, basically, is that the 1/2 of the country that isn’t Democratic has two options:

Please note that non-Democratic Americans are pigeonholed into being racist not because of what they actually think or how they behave, but by default. They don’t get a say in the matter. Oppose Democratic policies? You are–at least a little bit–a racist. End of discussion.

Democrats have turned race into a partisan weapon. The transformation is not complete, but it’s real and its ongoing. And it’s a suicidal political ploy in the long run because there’s no winning strategy here. It’s a cynical or ignorant decision to trade away any chance of racial reconciliation for political advantage. I’m not saying that this is the only thing holding back race relations. It is not. But it might be the biggest, because it means that conservatives and even moderates have no way to reach out in reconciliation without abandoning political positions that have nothing to do with race. Democrats are holding racial reconciliation hostage.

So what does this mean in practice? To me, it means every time I hear an American–white, black, or otherwise–question a fellow American’s blackness based on his politics I know that I can’t take that persons views on race at face value, because they’ve  bought into the race-as-political-weapon mentality. They are part of the problem, not the solution. Trouble is? Lots of people profit from problems.

1 thought on “Reconciliation and the Eternal Race War”