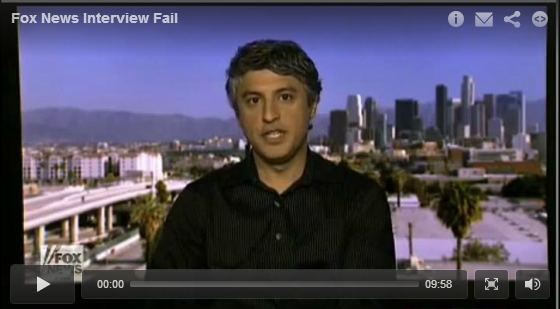 I love watching partisan news stories play out. It’s fascinating to see the way everyone weaves as fast as they can so that each new fact can be nestled snugly into a pre-existing worldview before the next one. That’s one of the changes of the Internet-based news era, I guess. We all make our own spin now.

I’ll be honest, though, when the painful-to-watch Fox News interview of Reza Aslan hit my social networking feed, I thought this was a pretty cut-and-dry case of total cluelessness on Fox’s behalf. Here, you can spin up the video while you read the rest of the post if you like.

The way I saw this video introduced was simple: Fox doesn’t understand academia. They don’t understand that scholars must, by necessity, bracket their personal convictions (like religion) when they do their scholarly work. And Reza Aslan definitely plays into that hardcore starting with the first–awkward and foolish–question “Why would a Muslim write a book about Jesus?”

I will say, however, that it’s not necessarily an out-of-bounds question if it’s being asked in a kind of inviting, open-ended way (e.g. “What insights do you bring to this question?”) as opposed to a kind of apologist bent (e.g. “What business does a Muslim have writing about Jesus?”) At first it’s hard to tell which meaning was intended by the host, but Aslan definitely latches onto the latter and fiercely depends his right and duty as a scholar to investigate across religious divides. As the conversation progresses, the host seems to fall into the same narrative, and so by the end of it you feel sort of like you’re watching a physics professor try to explain relativity to middle school kid.

Thus the narrative is set, and Slate, the Washington Post, and the New York Times (among many others) fell over themselves to stick it to Fox.

And I have to admit, Fox sure left the door pretty wide open. And yet…

I wasn’t really expecting to find a dissenting view because it seemed so clear cut. I assume that the folks on the far right fringe are livid about it, but I’m not even interested in hearing what they have to say. (What does that say about me? I’m not sure.) But when I stumbled on a link to a piece from First Things, I was interested. In the piece Matthew J. Franck doesn’t bother defending Fox (it’s a lost cause, as far as this clip goes). Instead, he points out that Aslan’s banner-waving of the term “scholar” is predicated on some pretty obvious falsehoods. A sample of Aslan’s claism:

As it turns out, almost none of those claims is actually true. He does have 4 degrees, but this is including his bachelor’s degree and also an MFA in Fiction. Don’t be me wrong, the MFA is from the University of Iowa and that’s impressive, but it doesn’t really qualify someone as an expert in the history of religions. Now, it turns out that Aslan also has a Master of Theological Studies from Harvard and a PhD from UC Santa Barbara, so it’s not like he’s waving around a diploma he bout from the Cayman Islands off of eBay. But the PhD is in sociology, not the history of religion, and his dissertation title is “Global Jihadism as a Transnational Social Movement: A Theoretical Framework.” That’s not actually relevant to religious history.

But what really matters more than any of this is that he claims that this (religious history) is “what I do for a living”. It’s not. As Franck writes:

He is an associate professor in the Creative Writing program at the University of California, Riverside, where his terminal MFA in fiction from Iowa is his relevant academic credential. It appears he has taught some courses on Islam in the past, and he may do so now, moonlighting from his creative writing duties at Riverside. Aslan has been a busy popular writer, and he is certainly a tireless self-promoter, but he is nowhere known in the academic world as a scholar of the history of religion. And a scholarly historian of early Christianity? Nope.

So there you have it. None of this excuses Fox’s ignorant and silly questioning and none of it invalidates Aslan’s claims in the book he’s promoting, but it definitely puts a whole new light on the picture. After all: what better way to promote your book then to go on Fox News, take umbrage at the first question, and spend your entire time creating a YouTube sensation featuring you standing up for truth, justice, and the Ivory Tower Way against the illiterate, reactionary barbarians at Fox News.

The lesson from Aslan is simple: If you’re willing to go through a few minutes of uncomfortable awkwardness in a venue that is ideologically anethma to your target audience, Internet celebrity (and book sales!) can be yours.

And what does any of this–from start to finish–have to do with Aslan’s book? Not. A. Damn. Thing. I hear it’s about Jesus or something?

UPDATE: Peter Enns has a good post at Patheos citing what two actual Biblical scholars have to say about the content of this book. They are Greg Carey and Anthony Le Donne. Carey is generous in his review and Le Donne isn’t, but both of them seem to come to similar conclusions. Which is that a lot of what Aslan reports is legitimate and familiar to anyone who is interested in Bible studies, but his key conclusions are based on either ignoring or fabricating evidence. In a nutshell: Aslan claims that the fact that the Romans crucified Jesus is enough (pretty much on its own) to conclude that Jesus was an armed insurrectionist. Which, you know, it kind of isn’t. I suggest reading Carey’s and Donne’s review for more info, but now you’ve got the gist of things.