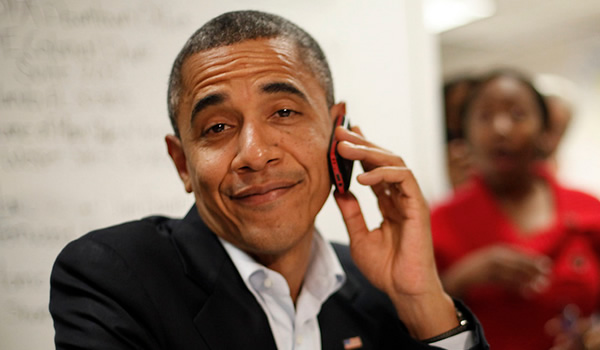 I’ve heard lots about so-called “Obamaphones”, but this is the first article that really explained what’s going on.

The Federal Communications Commission oversees the so-called Lifeline program, created in 1984 to make sure impoverished Americans had telephone service available to call their moms, bosses, and 911. In 2008, the FCC expanded the program to offer subsidized cell-phone service…

The rest of the article is really easy to predict once you know just one simple fact: the companies are paid by the government for every cell phone plan they create. If you’ve got a company that’s supposed to only hand out one free cell phone per household, but they’re getting paid by the cell phone, what do you think will happen? Jillian Kay Melchoir (who wrote this piece) decided to find out. Although she doesn’t qualify for any phones and although she never lied on any of the applications, she ended up with a handful of free phones anyway. She got progressively sillier in her attempts to get new phones, culminating in a scene like this one:

And at one Lifeline location in East Harlem, I walked up to the wireless representative talking very loudly on my own smartphone. I hung up only to answer her questions. Now, keep in mind that the program is supposed to provide cell-phone service to people too poor to afford any phone whatsoever — but my application for a subsidized mobile was happily submitted, even as I dinked around very obviously on my existing smartphone.

So there you have it. We’ve got a government program to give out cell phones to poor folk, but the two companies that actually hand out the phones (SafeLink and Assurance) are paid on a per-phone basis, and so they basically hand them out like candy. I don’t think this is at all typical of government welfare programs, but it’s a great example of how perverse incentives and corporatism (the collusion of private companies and government) goes horribly awry. It would be funny if it weren’t for, you know, the cost:

In 2012, the program’s costs had risen to $2.189 billion, up from $822 million before wireless carriers were included. As of June, there were 13.8 million active Lifeline subscriptions.

1 thought on “What Are “Obamaphones”?”