There are already lots of news articles about this story, but why not go to the source? This is Lavabit’s homepage with their entire statement: 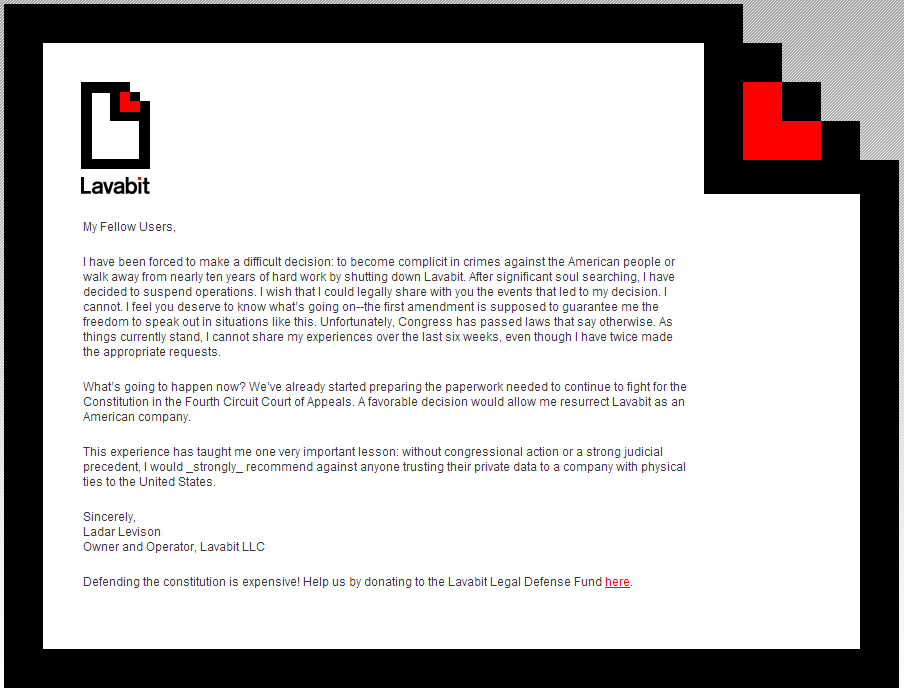 I consider myself a moderate on privacy issues (like a lot of issues). For years I’ve been torn between exasperation and genuine annoyance at some of the fringier elements of the privacy crowd. For example: I don’t really care if Google’s automated filters read my email and serve up relevant ads. It means I get free email and the ads are oftentimes amusing even when they aren’t exactly relevant. Most importantly, I don’t care if a computer program reads my email. I care if people read my email. For that reason, I also think that the principle of the NSA storing communications, using some kind of AI search to look for key words, and then only looking at selected messages flagged by reliable and reasonably accurate automated filters is not such a bad idea. In principle.

In practice, however, my doubts are mounting.

The fundamental problem is the age-old problem of corruption, and the underlying spine of my right-of-center convictions: power tends to corrupt and the first symptom of that corruption is the seeking of more power. The relationship between people and their government is a perpetually precarious one. Too little power, and government cannot protect individual liberties. Too much power, and government gobbles up those very same liberties. It’s a delicate dance between anarchy and tyranny, but it is a dance played out over decades, generations, or centuries and so it is easy to forget how hard it is to find the unstable equilibrium once we’ve drifted away from it.

One of the things that really bugs me about the entire subject is the unanimity of those in power: Boehner and Pelosi, Reid and McConnel, Obama and W. Bush: nowhere are these titans of American political power more united than in their agreement that the American people do not have a right to understand the government’s benevolent protection of them. There are only two reasons for this:

I’m not talking about a conspiracy theory. I think the fundamental motivation here is fear of blame. In the wake of 9/11,  Americans criticized archaic laws that prevented information sharing between various law enforcement and intelligence communities that could have prevented the attack. No one wants to be responsible for allowing a repeat. Powerful politicians protect these programs to protect their own careers. But the reality is that a lot of the “protections” in place do not actually protect anyone (e.g. the TSA and security theater) and that it’s time to ask seriously if the cost to our liberties–and to the lives of the young men and women we use as human shields by sending them to soak up radical anger in Afghanistan and Iraq–is worth the benefit. 3,000 people died in the 9/11 attacks. More people than that died from additional car accidents in the following years as people chose to drive (which is dangerous) rather than fly (which is incredibly safe) either out of fear or out of annoyance with no security precautions. (Nearly 1,600 extra deaths just in the first year following the attacks!)

Americans–the vast majority of them–have been slow to react. This is because people don’t generally care about abstract issues as a universal rule, and also because the leading spokespeople on this issue continue to come from the fringe. Let’s face it: Richard Stallman is never going to speak for a generation. Bradley Manning and Edward Snowden are each tainted, Manning from colluding with a self-aggrandizing rapist and Snowden from questionable ties to anti-American, tyrannical regimes (Russia and China).

I don’t predict any sudden changes in the immediate future, either, but this issue isn’t going away. And it shouldn’t. If America cedes the high ground on this issue, who is going to pick up the torch? Vladmir Putin? Raoul Castro? Practically speaking, the future of the Internet itself is very much at stake as other nations are increasingly resistant to US hegemony. Just look at what Lavabit had to say: “I would _strongly_ recommend against anyone trusting their private data to a company with physical ties to the United States.” Already EU resentment is mounting, especially in Germany. But, once again, do we think the United Nations would do better? (That’s rhetorical sarcasm, in case you can’t tell.)

There’s a lot at stake here, and even if it the realization is slow in coming, I think the American people are starting to get it. I sure hope so.