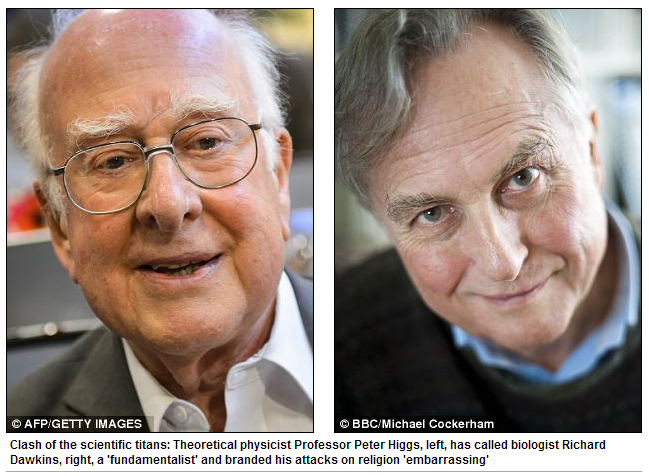 This is an older article (Dec 2012) and at the time people figured Higgs was a contender for the Nobel. Now we know he got it. In any case, one of the greatest minds in theoretical physics points out what I’ve been saying for years: that the New Atheists (or at least Dawkins, one of their examplars) are the mirror image of the fundamentalists that they choose to focus their criticisms on. This remark came not long after Dawkins dropped another gem, saying that “Horrible as sexual abuse no doubt was, the damage was arguably less than the long-term psychological damage inflicted by bringing the child up Catholic in the first place.”

I imagine his fans will continue to post his quotes and parrot his arguments for quite some time, but I think his credibility with most fair-minded people is pretty well shot at this point. It should be, at any rate.

Edit: In the first version of this post, I mistakenly attributed a summary of Dawkins comment to Dawkins. The summary read: “Raising a child in the Catholic church was worse than sex abuse dished out to youngsters by priests.” The actual quote is now included in the body above. HIggs’ statement is also more qualified than the headline suggest. He actually said “Dawkins in a way is almost a kind of fundamen- talist himself.”