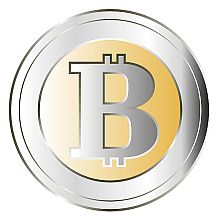 Bitcoins are a little hard to explain. The idea of fiat currency is that dollars (or pounds, yen, whatever) have value more or less because the government says so. There’s no intrinsic value to the money. Same basic idea with Bitcoins, except that instead of being backed by a government they are backed by… nobody.

But they are set up in such a way that you can’t really forge them. You have to get your computer to solve a really, really complex problem (taking months of computing time) in order to “mine” a Bitcoin, and there will only ever be 21 million in existence. They are divisible down to 8 decimal places, however, so 21 million will be plenty for the foreseeable future.

You can’t  buy a lot with Bitcoins these days ’cause most places don’t accept them, but some do. This got people all excited a while back and speculation led to a 60,000% increase in price (measured vs. good ole USD) and then a corresponding crash. But the market recovered. More recently, the FBI raided Silk Road (a black market that uses Bitcoins) and the market crashed again. But not that much. As Sam Volkering notes, the all-time high was $230 (for one Bitcoin), and the market was about $140 when the Feds shut down Silk Road. The price of Bitcoins fell, but not below $100.

Volkering’s point, and I think it’s a good one, is that if shuttering the #1 outlet for Bitcoins doesn’t totally devastate the value, they might have some real staying power. Of course, the Feds haven’t really targeted Bitcoins directly, and I’m not sure they would survive. There are a lot of advantages to digital currency, but the whole point of Bitcoins is that they are anonymous and untraceable. No government in the world is going to be comfortable with that proposition.

5 thoughts on “Maybe We Should Take Bitcoins Seriously…”