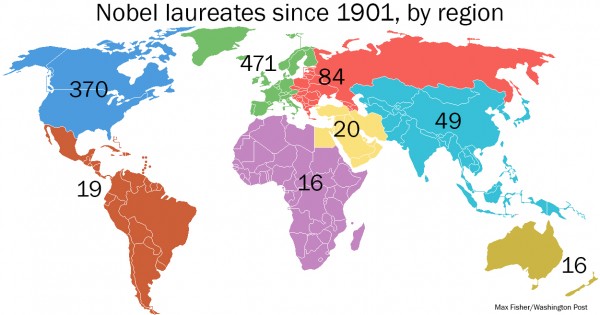 • Nobel prizes have been awarded to people from 72 different countries. But more than half all Nobel laureates come from only three countries: the United States, Britain and Germany.

• Just over half of all Nobel laureates are from Europe: 54 percent. Of those, most are from Western Europe, which has had 45 percent of all laureates. You can see this in the giant swathe of green in the circle chart above.

• About half of the world’s Nobel laureates are from the Anglosphere: Britain, United States, Canada, Australia and New Zealand.

• The second most common native language among Nobel laureates is German; 152 laureates are from German-speaking countries.

• The Middle East has had 20 Nobel laureates: 12 Israelis, four Egyptians, one Palestinian, one Iranian, one Turk and one Yemeni. Ironically, it also has the largest proportion of peace prize winners: eight of the 20 Middle Eastern laureates are peace-prize winners.

• The top 10 countries with the most Nobel laureates, in order. Pay attention to how top-heavy this list is; the numbers drop precipitously:

What isn’t mentioned is the amount of Jewish recipients: “At least 193 Jews and people of half- or three-quarters-Jewish ancestry have been awarded the Nobel Prize, accounting for 23% of all individual recipients worldwide between 1901 and 2013, and constituting 37% of all US recipients during the same period.”

This is pretty fascinating. Or should I be disturbed with the unequal distribution of Nobel Prizes?