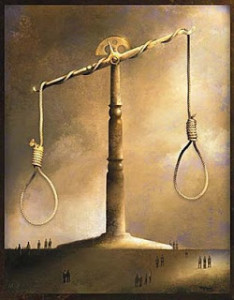 Sixty percent of Americans say they favor the death penalty for convicted murderers, the lowest level of support Gallup has measured since November 1972, when 57% were in favor. Death penalty support peaked at 80% in 1994, but it has gradually declined since then.

In my experience, most arguments around the morality of the death penalty focus on whether the government should have the right to execute people guilty of certain particularly heinous crimes. I believe the work of organizations like the Innocence Project has drawn attention to a different category of death penalty opposition: a person can believe it is morally acceptable to execute the guilty, yet still oppose the death penalty because they believe the system is too error-prone to implement (i.e. there’s too high of a risk of executing innocent people).

Of course we will never have a perfect system, but there are certain reforms that can lower the error rate. Still the questions remain: when risking innocent lives, what error rate is low enough? What do we gain in return for that cost?

I do believe some people deserve to be executed. I’m just weary of entrusting such an awesome responsibility to our government.