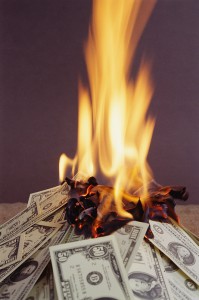 Reuters is reporting that, in an accounting fiasco of truly comical proportion, the Pentagon has lost billions of dollars in taxpayer money with no record of where or how the money disappeared. The grand injustice is that had such a debacle occurred in a private corporation it would result in prison sentences. The difference being, of course, that in the case of a corporation the money being flushed into the nether ostensibly belongs to the government, whereas in this case, no big deal, the money belongs to the American people.

When there is a question about why a large segment of the population wants a smaller government, it’s stories like this that support their arguments. Is this an inevitable result of big government, or is this a systemic issue of the particular type of government currently occupying Washington? Where is the responsibility? Where is the accountability?

The Department of Defense accounts for more than half of yearly government spending, and they can’t balance their books without pulling numbers from thin air. Is it any wonder so many are objecting to concentrating further enormous financial outlays into the hands of that same government body in the form of health care?

Because of its persistent inability to tally its accounts, the Pentagon is the only federal agency that has not complied with a law that requires annual audits of all government departments. That means that the $8.5 trillion in taxpayer money doled out by Congress to the Pentagon since 1996, the first year it was supposed to be audited, has never been accounted for. That sum exceeds the value of China’s economic output last year.

The numbers are easy to write down but they’re almost beyond my comprehension. Aside from the obvious question about how much defense spending is too much, how much of that 8.5 trillion dollars has been lost? How much of it came out of your pocket, or your friends’ or your parents’, and how much of it will never be recovered?

Congress in 2009 passed a law requiring that the Defense Department be audit-ready by 2017. Then-Defense Secretary Leon Panetta in 2011 tightened the screws when ordered that the department make a key part of its books audit-ready in 2014.

Reuters has found that the Pentagon probably won’t meet its deadlines. The main reason is rooted in the Pentagon’s continuing reliance on a tangle of thousands of disparate, obsolete, largely incompatible accounting and business-management systems. Many of these systems were built in the 1970s and use outmoded computer languages such as COBOL on old mainframes. They use antiquated file systems that make it difficult or impossible to search for data. Much of their data is corrupted and erroneous.

Why does this happen? Why is it allowed to happen? The only answer that makes any sense to me is because there’s no impetus for change because there is no penalty for screwing up. You lose a few million bucks in a year in your department to “accounting errors” and the like at any company in the country and you’ll be on the street in an instant. In the government, this kind of failure is allowed to go on for years without much more than empty threats from largely-disinterested politicians on Capitol Hill. Deadlines and restrictions are frequently imposed and inevitably ignored, both out of conflicting goals of necessity, incompetence, and good old fashioned corruption.

The Defense Department’s arguments in their own defense ring hollow, with excuses that attempt to mask the amount of money lost by pointing to purposely-excessive number fudging that function as IOUs and are, usually, accounted for in time. This does nothing to explain why such number fudging should be necessary in the first place, nor is there convincing proof that this is true since much of the money is still unaccounted for after years and years with no prospects of recovery.

In the end, we are the victims, working every day to put thousands of dollars each year into a nightmare machine from which we will never see any return.