Next up, BuzzFeed asked a bunch of Brits to try the same task in honor of the Thanksgiving holiday. Their results weren’t any better.

Then there’s the BoredPanda version which takes the other approach by asking a bunch of Americans to try and label European countries with predictable results.

That big “FORGIVE ME!!” grabbed my attention, and I quickly realized that it wasn’t an isolated aberration. Several of he American attempts included apologies of one sort or another, not to mention self-deprecation like “I am very ashamed.” Where the Americans seemed conscious of their ignorance and at least a little bit sensitive to the countries they were failing to identify, the Brits couldn’t care less. There was one apology in the mix along with comments like aforementioned “who cares?” or “EMPTY VOID” (which consists of the Dakotas, both North and South).

I don’t want to overgeneralize from an Internet joke, but it did get me thinking about the relative ignorance of Americans and Europeans when it comes to the rest of the world. After all, the shocking ignorance of Americans is a familiar refrain. It’s so familiar that I had a hard time searching for any evidence about it because all the search results were along the lines of “Why are Americans so staggeringly ignorant?” Few of them addressed the question of “Are Americans so staggeringly ignorant?”

I did find a few, however. First, I found this piece on Defending American Ignorance. The author does a great job of explaining why Americans seem ignorant relative to Europeans, but really are’t. The basic idea is that the US is a whole lot bigger than Europe, so an American could no more tell you the difference between Hungary and Slovakia than a European could tell you the difference between Tennessee and West Virginia. He also brings up the importance of absolute importance: the US is important (at this point in world history) in a way that many smaller nations simply are not (except to those who live in them):

Most Europeans don’t know much more than Americans about what’s happening in Uruguay, New Zealand, and Namibia because those countries are both far and insignificant to them.

Good argument, but no evidence to back it up. So I kept digging and found two more sources. The first was a 2002 National Geographic survey. From the second page of the article:

Young adults worldwide are not markedly more literate about geography than the Americans.

On average, fewer than 25 percent of young people worldwide could locate Israel on the map. Only about 20 percent could identify hotspots like Afghanistan, Iran and Iraq.

Of all the young adults in the survey, only about one-third in Germany, Sweden and Japan, could name four countries that officially acknowledge having nuclear weapons. In the rest of the countries that number dropped to less than a quarter. In France 24 percent did not know that that their own country was a nuclear nation.

That’s kind of what I’d suspected: American ignorance is real. But it’s mostly part of the general rule that people don’t know a lot about things that have little impact on their day-to-day lives.

The last source I found was slightly more recent: a Casual Fridays post from Science Blogs  in 2007. They created a pair of surveys. In the first, Europeans tried to identify 10 American states. In the second, Americans tried to identify 10 countries (from anywhere in the world). The survey wasn’t scientific (participation was voluntary), but they did dig into the results a little bit looking for obvious evidence of selection bias and found suggestive evidence that it wasn’t a problem.

So the results? Europeans demonstrated once again that they really have no idea what the United States looks like at the state-level: 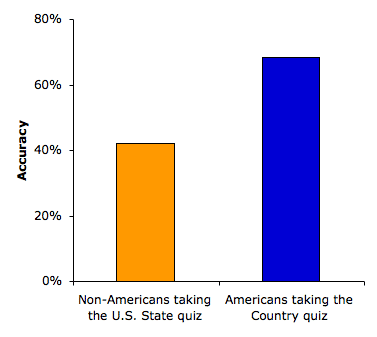 They also took a look at the results of both Europeans and Americans trying to name the countries (from anywhere in the world). In that case, the Europeans appeared to have a narrow but real advantage.

The Non-Americans do very slightly better, but further analysis showed that all of their advantage came from exactly one question about Denmark. When that European country is removed, the Non-American and American responses (both being asked about countries around the world outside of the US or Europe) were dead even.

So it’s not the scientific survey I was hoping I might find, but it does seem like fairly suggestive evidence that Americans aren’t really significantly less aware of the world around them than Europeans.

So what was the point of this exercise?

I’ll admit that part of it stems from defensiveness. The US is a punching bag in many circles, and that annoys me. Not that the US is perfect (what nation is?) but it’s my home. Home means something to me.

But that’s not really what matters here. The bigger picture, for me, is common humanity. Deep down, people are just people, no matter where they are from. This isn’t to deny obvious cultural and national differences. It’s to realize that those differences are conditional. They aren’t essential.

One way to look at this is that humanity is the hardware, and culture is the software. Culture changes how we behave, but there’s always a deeper level and at that level people really are the same no matter where they come from. Culture is important, yes, but it can and does change. It can be modified, questioned, challenged, negotiated, and compromised.

This whole discussion is just a simple example. Americans seem bizarrely ignorant relative to Europeans, but it turns out they aren’t. Once you factor in the outside variables (like the size of Europe vs. the United States) and consider fairly neutral examples (like asking questions about non-North American, non-European countries) the differences go away. Peel back the layers, and you get back to the fundamental truth of humanity: we’re all the same.