Jordan Weissmann, writing for The Atlantic, thinks he has calculated the total cost of free tuition in the United States at public universities. The headline? “Here’s Exactly How Much the Government Would Have to Spend to Make Public College Tuition-Free.”1 It’s adorable, really.

First Weissmann gets the total amount spent on all public university tuition ($60b). Then he subtracts the government aid that currently goes to public schools (about $20b). Next, he carefully considers the impact that free education would have on the folks who go to private universities, and estimates how many of them would move to public school (no, I’m kidding, he totally ignores that.) Additionally, he considers all the folks who currently don’t go to college at all because the price and/or financial aid process is intimidating and generates an estimate for new entrants into college (ha, yeah, no: that’s not actually in there.) Then, he considers the indirect costs of overcrowding, the capital outlays that public universities would have to spend on new classrooms, housing, and facilities, and the costs of hiring and training all the new faculty and staff to handle the influx (yeah, that’s not mentioned in the article at all.) Finally, he considers related, complex issues like the future of the profit-machine that is college athletics and how it would interact with this new regime (by now you know very well that he did absolutely no such thing.)

Instead, he compares his make-believe $40b number2 to this pretty chart. 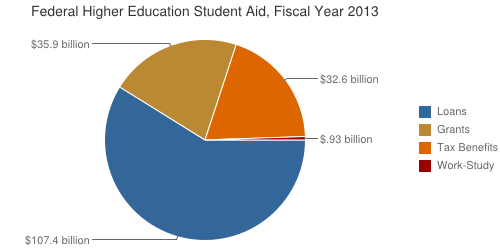 Which tells us… nothing, really.3

On the one hand, I can’t blame Weissmann for not doing all that extra work. I spent about 20 minutes trying to get numbers, and it was not fun. But the problem with taking the easy way out is that (in this case at least) you end up with a phony estimate of an irrelevant number. If we think that free public education for K-12 is a good idea, then it’s entirely plausible that free public education for K-16 is a good idea. My point is not that Weissmann’s final conclusion is wrong. Rather, it’s that (1) lazy analysis is counter-productive and (2) pretending that markets don’t exist is silly. If you’re not talking about the way people will respond to major changes in prices, you’re not having a serious conversation of any kind.