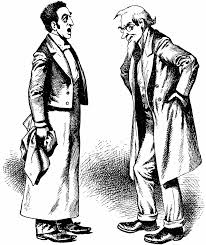 Adam Greenwood has a pretty insightful look at one of the commonly confused aspects of arguing about gay marriage over at Junior Ganymede.

A lot of time gets wasted in arguments that are really about what the proper unit of analysis is, without any of the participants quite realizing that is what their argument is about.

Read the rest for his resolution of this problem, which is really helpful in bringing some clarity to the debate.

1 thought on “Gay Marriage and Levels of Abstraction”