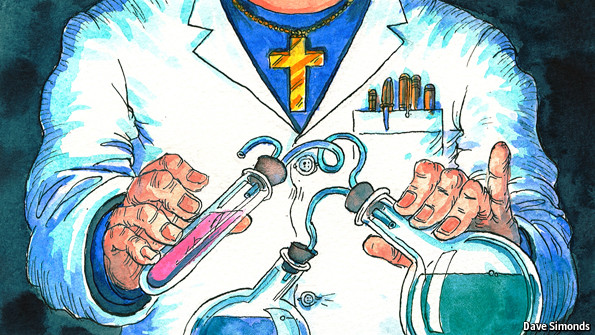 I’ve written before about the supposed conflict between religion and science. Spoiler alert: there isn’t one. Reasonable people, whether or not they are scientists and whether or not they are religious, see no particular need for religion and science to be opposed. The impression persists, however, because the vocal minorities on either end of the spectrum find it in their best interest to keep the issue alive and because of occasional surveys that appear, at first glance, to validate the divide.

One example, which this article from The Economist cites, dates from 2010 when

Elaine Howard Ecklund, a sociologist at Rice University, caused a stir with a survey of 1,700 scientists at Harvard, MIT and other elite colleges. About a third were atheists (as opposed to fewer than one-in-20 ordinary Americans), just under a third were agnostics, and the rest reported varying degrees of belief.

Well, Ecklund is back with a newer and much bigger survey (more than 5x the size of the last one). The results? Quoting from The Economist again:

At the annual meeting of the AAAS in Chicago on February 16th Dr Ecklund unveiled the first results of a still-larger study into science and religion… This new survey sought out “rank-and-file” scientists: researchers in company labs, engineers, dentists and so on. To her surprise, Main Street scientists are only a bit less religious than the average American. Perhaps Ivy League scientists are ultra-secular because they are Ivy League, not because they are scientists?

I didn’t find any comprehensive guide to the results, and early press reports are just starting to come out a few days after the fact, but this article from Science and Religion Today had some initial findings. Among them:

It makes me wonder, how much of these three groups (the 27 percent who see science and religion in conflict, the 20 percent who perceive religion as hostile to science, and the 22 percent who think scientists are hostile to religion) is overlap? At a guess, it looks like we really do just have too polar extremes (about 15% to a side) who are busy shouting at each other about some never-ending conflict between science and religion while the rest of us wish they would both just shut up.

The important thing, I think, is to remember that the crazies may have us surrounded, but we’ve got them outnumbered.