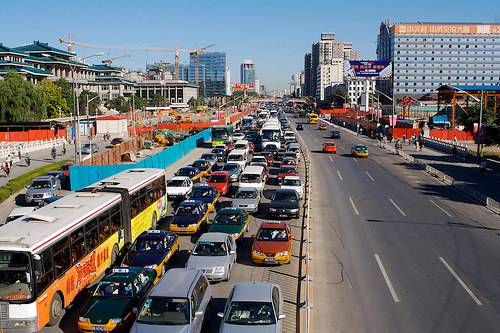 Ars Technica has an article with responses from two sides, Cogent Communications vs. Verizon, of an increasingly-relevant corporate backroom debate involving multiple players that has already begun to affect the everyday life of a huge swath of internet subscribers in the US and has ties to the growing debate over net neutrality. The argument breaks down as follows. Let’s use the roads analogy I used in my earlier post about net neutrality and stretch it into absurdity:

Imagine that Verizon owns all the roads from you to halfway to the nearest Netflix distribution center, and another company, Cogent, owns all the roads from that point and the rest of the way to the Netflix distribution center. Verizon and Cogent have an implicit arrangement to allow traffic to pass unmolested at the switch point from one road network to the other. You have an explicit contract with Verizon that every month you can receive unlimited shipments from anywhere in the world but at a maximum of twenty per day, and each time you or anyone else wants a shipment they have to dispatch a messenger on a bicycle, creating a small but steady stream of outflowing traffic.

Netflix is sending at least a million shipments a month to everyone in your neighborhood and surroundings and the number is growing. Eventually, the incoming Verizon road starts to become clogged with shipments, many of them Netflix’s big trucks, and people start to miss their shipments from both Netflix and elsewhere and instead of being able to get twenty shipments per day per their contract with Verizon, they can only get ten or fifteen. Meanwhile, Verizon, instead of using money from their existing business to upgrade their roads to handle a higher volume of traffic, simply allows the road to remain gridlocked unless Cogent or Netflix pays them money to finance the upgrades, and the price they are demanding is many times higher than a typical equivalent construction project requires.

This is essentially what is happening right now. In a sense, Verizon is leveraging their stranglehold on huge parts of the US ISP market to hold both customers and content providers hostage from each other, separating customers from the content they have requested and content providers from their subscribers unless someone ponies up to their satisfaction. Their complaints about traffic disparity aren’t necessarily unjustified, but punishing their customers and reneging on their agreements is wrong. What they’re doing is tantamount to extortion, and it only works because there is no recourse for anyone, and they know it. The problem will only get worse so long as Verizon, Comcast, et al face little or no competition in their markets. Traffic will degrade, it will be discriminated against, and we’ll pay more for it.

This is what happens when we let the government bestow superpowers on rich corporations and not take seriously their mandate to regulate anti-consumer behavior.

1 thought on “Double-dipping, The Verizon Way”