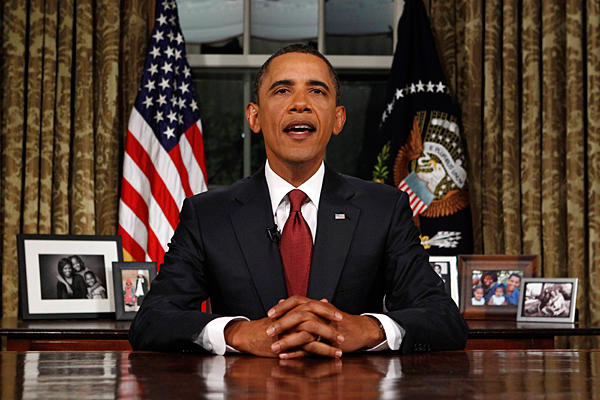 President Obama, assuring people that NSA vacuuming up huge amounts of phone metadata isn’t as creepy as it sounds:

When it comes to telephone calls, nobody is listening to your telephone calls.  That’s not what this program is about.  As was indicated, what the intelligence community is doing is looking at phone numbers and durations of calls.  They are not looking at people’s names, and they’re not looking at content.  But by sifting through this so-called metadata, they may identify potential leads with respect to folks who might engage in terrorism.  If these folks — if the intelligence community then actually wants to listen to a phone call, they’ve got to go back to a federal judge, just like they would in a criminal investigation.

So I want to be very clear — some of the hype that we’ve been hearing over the last day or so — nobody is listening to the content of people’s phone calls.  This program, by the way, is fully overseen not just by Congress, but by the FISA Court — a court specially put together to evaluate classified programs to make sure that the executive branch, or government generally, is not abusing them, and that it’s being carried out consistent with the Constitution and rule of law.

And so, not only does that court authorize the initial gathering of data, but — I want to repeat — if anybody in government wanted to go further than just that top-line data and want to, for example, listen to Jackie Calmes’ phone call, they would have to go back to a federal judge and indicate why, in fact, they were doing further probing.

You got that? They are only getting metadata. No big deal, right? If they really want the juicy goods, then they’ve got to go back to a federal judge. This argument rests on the premise that phone metadata is not, in and of itself,  highly sensitive data. Which, when you think about it, is not really a hypothetical or philosophical question. It’s an empirical one. It’s something you could test. So… what kind of info can you glean from a person’s metadata?

The folks at Web Policy set out to answer the question. They used metadata gathered from a small number of volunteers over just a few months to see what they could learn about those volunteers looking only at metadta. Turns out, they could learn quite a lot.

The degree of sensitivity among contacts took us aback. Participants had calls with Alcoholics Anonymous, gun stores, NARAL Pro-Choice, labor unions, divorce lawyers, sexually transmitted disease clinics, a Canadian import pharmacy, strip clubs, and much more. This was not a hypothetical parade of horribles. These were simple inferences, about real phone users, that could trivially be made on a large scale.

This, ladies and gentlemen, is the kind of information your government can collect on you without a warrant or notification or really any restriction of any kind. But that’s not all.

Nothing to worry about, right? It’s just metadata, after all. It’s not like they’re listening to your calls, or something.

2 thoughts on “How Sensitive is Phone Metadata? Very.”