The New York Times has an excellent article on the recently reported discovery of gravitational waves, providing what is being called the “smoking gun” of cosmic inflation. The article provides a simple, but detailed explanation of the theory of inflation:

THE UNIVERSE  is just under 14 billion years old. From our position in the Milky Way galaxy, we can observe a sphere — the visible universe — extending 14 billion light-years in every direction. But there’s a mystery. Wherever we look, the universe has an even temperature.

NOT ENOUGH TIME  The universe is not old enough for light to travel the 28 billion light-years from one side of the universe to the other, and there has not been enough time for scattered patches of hot and cold to mix into an even temperature. 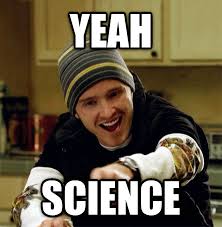 DISTANT COFFEE  At a smaller scale, imagine using a telescope to look a mile in one direction. You see a coffee cup, and from the amount of steam, you can estimate its temperature and how much it has cooled.

COFFEE EVERYWHERE  Now turn around and look a mile in the other direction. You see a similar coffee cup, at exactly the same temperature. Coincidence? Maybe. But if you see a similar cup in every direction, you might want to look for another explanation.

STILL NOT ENOUGH TIME  There has not been enough time to carry coffee cups from place to place before they get cold. But if all the coffee cups were somehow filled from a single coffee pot, all at the same time, that might explain their even temperature.

INFLATION  solves this problem. The theory proposes that, less than a trillionth of a second after the Big Bang, the universe expanded faster than the speed of light. Tiny ripples in the violently expanding energy field eventually grew into the large-scale structures of the universe.

FLUCTUATION  Astronomers have now detected evidence of these ancient fluctuations in swirls of polarized light in the cosmic background radiation, which is energy left over from the early universe. These are gravitational waves predicted by Einstein.

EXPANSION  Returning to our coffee, imagine a single, central pot expanding faster than light and cooling to an even temperature as it expands. That is something like inflation. And the structure of the universe mirrors the froth and foam of the original pot.

Andrei Linde, the physicist who championed the notion of chaotic inflation in 1983, was surprised with the news at his home by Stanford’s Chao-Lin Kuo, a member of the research team behind the new discovery.

This is very exciting.

1 thought on “The “Smoking Gun” For Cosmic Inflation”