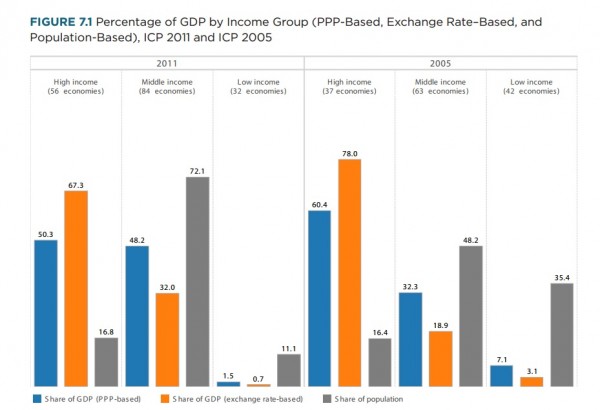 The World Bank released a summary of the findings of the 2011 International Comparison Program (ICP), which analyzes PPP and real expenditures worldwide. The report describes

the interaction between the real sizes of GDP for 177 economies with the relative price levels for major aggregates and per capita expenditures based on their population sizes. The results indi­cate that only a small number of economies have the greatest shares of world GDP. However, the shares of large economies such as China and India have more than doubled relative to that of the United States. The spread of per capita actual individual consumption as a percentage of that of the United States has been greatly reduced, suggesting that the world has become more equal (pg. 89; bold mine).

The report explains that this should be “interpreted with caution” due to “changes in the ICP methodology and country coverage…” Nonetheless, this is fantastic news. Pope Francis and the rest of us should be rejoicing.

This is just one more source lending support to what Nathaniel and I argued in SquareTwo: global poverty and inequality are declining largely thanks to globalization.