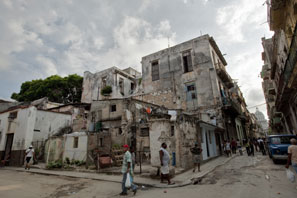 Journalist Michael Totten has a disturbing article in the Spring edition of City Journal on the effects of communism in Cuba’s Havana. Using the recent film Elysium to paint a picture of life in Havana, Totten documents how he lied to get into the country and what he witnesses. “Outside its small tourist sector,” he explains, “the rest of the city looks as though it suffered a catastrophe on the scale of Hurricane Katrina or the Indonesian tsunami.” While the goals of the Marxist leaders “were total equality and the abolition of money; the methods were total surveillance and political prisons. The state slogan, then and now, is “socialism or death.”” Furthermore, “Cuba has a maximum wage—$20 a month for almost every job in the country. (Professionals such as doctors and lawyers can make a whopping $10 extra a month.)” This maximum wage is defended by the government, which argues “that life’s necessities are either free or so deeply subsidized in Cuba that citizens don’t need very much money. (Che Guevara and his sophomoric hangers-on hoped to rid Cuba of money entirely, but couldn’t quite pull it off.) The free and subsidized goods and services, though, are as dismal as everything else on the island.” This includes their supposedly wonderful health care system that Michael Moore was raving about years back. This “free” health care requires patients “to bring their own medicine, their own bedsheets, and even their own iodine to the hospital. Most of these items are available only on the illegal black market, moreover, and must be paid for in hard currency—and sometimes they’re not available at all. Cuba has sent so many doctors abroad—especially to Venezuela, in exchange for oil—that the island is now facing a personnel shortage.”

There’s much more. Check it out.