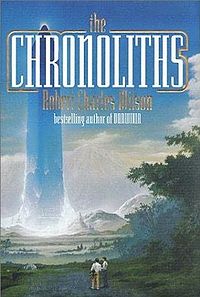 It could just be me, but I don’t hear folks talk about Robert Charles Wilson enough. The first book of his I read was Spin

) was good, but not great. I’m listening to The Chronoliths

now, which was nominated for a Hugo in 2002. Turns out he’s been nominated a few more times, too (1999 and 2010), but–like I said–he’s just not a name that I hear come up often enough in discussions of great sci-fi.

The reason I like Robert Charles Wilson is that he’s one of the best there is at combining truly human-centered, character-driven stories with real, honest, sci-fi concepts. The drama in his books is emphatically character-driven, but it simply couldn’t exist without the sci-fi elements. To me: that’s what all sci-fi should strive to be.

He also has some prose chops. Look, I realize that sci fi (along with all genre fiction) tends to be less about the art and craft of prose than literary fiction, but there were some parts of “Spin” that rose to the level of good art by any standard.

He’s one of those guys who, when I’m reading their story, I think to myself: “I’ll really be doing alright if I ever get this good.”