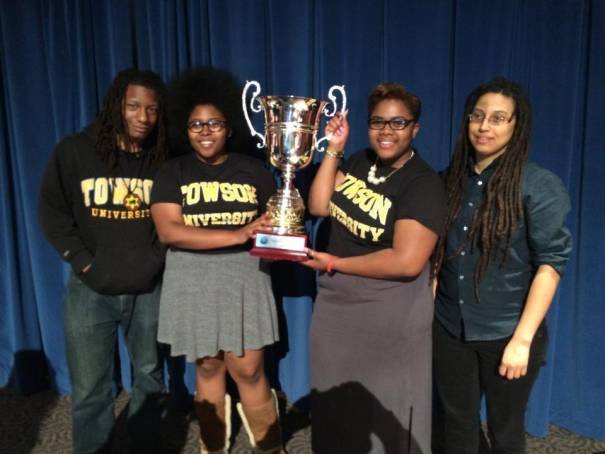 There’s a story percolating through the right wing blogosphere right now about the victory of Townson U in a national debate contest “by repeating N-word and babbling nonsense.” The fact that the winning team consists of two black females is never mentioned explicitly1, but race is obviously a part of this story. The (unspoken) gist of it appears to be something like: black students who are not actually competent at debate got an award because of political correctness. To back that up, the blog posts feature transcripts and YouTube videos of the debate, like this one.

That video contrasts the two young ladies in a news story, where they speak articulately and calmly, with clips of their emotional and quite frankly weird speech during the debate. It’s an ugly video because of what it implies instead of having the courage to say. The cuts are obviously designed to undermine what the young ladies say to the reporter with seemingly contradictory excerpts from their debate performance. For example, the reporter asks, “Once you know the topic, what’s next?” One of the women replies, “Well, you do a lot of research.” And then there’s an immediate cut to the debate right at the point where one of the speakers is stuttering heavily. Race is never mentioned, but the point is clear.

Now, I approached this story without any special inside info. I’ve never debated competitively, nor have I ever seen a competitive debate. But I decided to do the one thing that the conservative bloggers apparently decided to skip. Research.

I started with two hypotheses that might explain the apparent contradiction between assumptions about what a national championship debate team might sound like and the jarring YouTube footage. Either this was in some sense an “urban” form of debate or, more likely, the timing rules of competitive debate forced competitors to adopt really strange, unnatural speech patterns. It’s not hard at all for me to imagine, for example, that competitors are judged purely based on the content of their argument and not so much their delivery and/or that the expectations for content delivery are much different in a competitive setting.

I started with the first one because while it seemed less likely, it would be easy to check. Is the Cross Examination Debate Association a minority-focused group? No, it is not.Founded in 1971, it is “the largest intercollegiate policy debate association in the United States.”

So I went to my second hypothesis and decided the simplest thing to do would be to check on the winners from last year. If I got a video of some white competitors using roughly the same kind of speech, I’d kill two birds with one stone. Clearly, if last year’s competitors were white, there wouldn’t be some kind of obvious minority-preference and secondly, if this is how the teams from last year sounded then it would strongly indicate that what we’re hearing has nothing to do with race and is just the way competitive debate works. I searched YouTube and, on the first try, hit the jackpot. Here’s a video called: “More CEDA 2013 Debate Highlights.” A couple of things to note before you watch it:

So let’s recap. In 2013, and probably in many years before that, white kids won a debate contest that, by its competitive nature, seems to require participants to speak in really, really weird ways. No one cared. In 2014, black women won the debate contest using the same tactics, but suddenly conservative writers noticed, 2 and they wrote off the bizarre-sounding speech as “unintelligible gibberish” without checking to see if that’s just how debates work.

So: assumptions about folks being less intelligent and/or less capable of speaking standard English because they are black. Yup, that looks like racism to me.

Am I missing something here?

4 thoughts on “Looking for Racism on the Right: A Case Study”