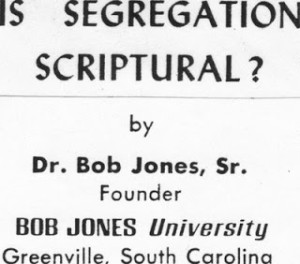 Randall Balmer of Dartmouth College has an interesting article in Politico Magazine arguing that the the origins of the modern Religious Right in American politics can be found in the fight over segregation. Rather than Roe v. Wade (which was seen as a “Catholic issue” by many evangelicals both several years before and after Roe), it was Green v. Connally that caused evangelicals to organize. The case ruling declared that “racially discriminatory private schools are not entitled to the Federal tax exemption provided for charitable, educational institutions, and persons making gifts to such schools are not entitled to the deductions provided in case of gifts to charitable, educational institutions.” One such institution was Bob Jones University, a fundamentalist college located in Greenville, South Carolina. The school eventually lost its tax exempt status, “alert[ing] the Christian school community about what could happen with government interference.”

The article is quite a read. Of course, this isn’t the only thing that led to the rise of the Religious Right,1 but it is an element often left out. This is also true of the American Left’s history, which was often critical of the Constitution (particularly Wilson) while friendly toward fascism and eugenics.

It kind of makes you lose faith in American politics altogether (if you had any to begin with).