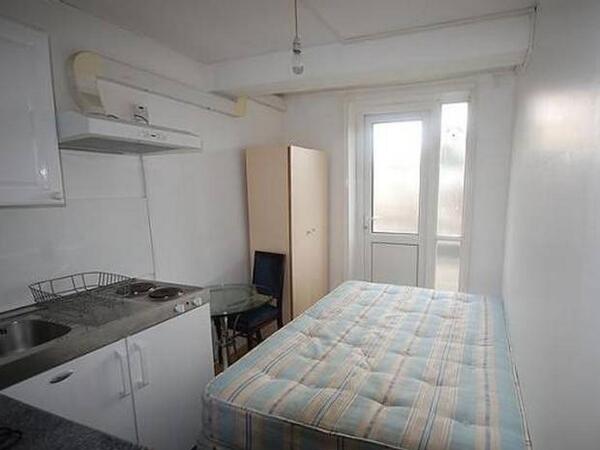 So apparently someone wants to rent this tiny London apartment (pictured above) for $1,230/month. Outrage ensues.

Now, the weird thing is that it’s perfectly reasonable to imagine someone wanting to rent that apartment for that price.1 I once had to commute up to the Northern Virginia area while my family lived in Williamsburg for work every week. I was lucky enough to have a kind friend with a guess suite, but if I hadn’t had recourse to that, such a tiny little domicile would have been perfect. I seriously investigated living out of my car before my benefactor appeared.

I think the intuition is that if someone is willing to pay $1,230 for such a tiny apartment, then they must have pretty crappy alternatives. And that is true. But taking away the apartment doesn’t actually improve that person’s prospects. It just removes the evidence of their misfortune from public view. This isn’t about helping anyone any more than placing spikes where homeless people sleep is about helping homeless people. And yes: that’s a real thing. In London they don’t want you to rent out a tiny, cheap apartment but they also don’t want you to sleep on the pavement, either. This looks less like compassion for the poor and a lot more like spraying your house for ants. You don’t really care if the spray kills them or helps them or hurts them, as long as they aren’t in your house anymore.

I call this “Sweatshop Anxiety” because that’s sort of the biggest example of the problem. The thought of poor people in third world countries working long hours in terrible conditions makes rich Westerners want to shut down sweatshops. Which helps the poor… how?

I’m not saying there’s nothing we can do. I’m just saying that reducing options probably almost never helps.

2 thoughts on “On the Selfishness of Sweatshop Anxiety”