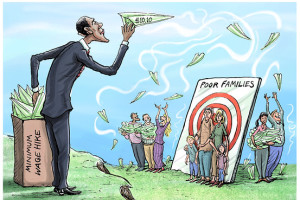 We’ve written a lot about minimum wage hikes here at Difficult Run. Here’s another to add to the list: economist David Neumark (who has published extensively on minimum wage) has an op-ed in The Wall Street Journal arguing that minimum hikes may indeed go to low-wage workers, this very different from saying they go to low-income families. “One might think that low-wage workers and low-income families are the same,” Neumark writes. “But data from the U.S. Census Bureau show that there is only a weak relationship between being a low-wage worker and being poor, for three reasons” (reasons that are “descriptive evidence” and “not disputed by economists”):

The amount of low-wage workers from poor families dropped from 85% in 1939 to 17% by the early 2000s due to changes in social safety nets and family structure. Evidence indicates that only 18% of the benefits of a national minimum wage of $10.10 would go to poor families, while 29% would “go to families with incomes three times the poverty level or higher.” The benefits for poor families decline to 12% at 15 dollars, while benefits for the well-off would increase to 36 percent. Neumark further explains that “most studies…fail to find any solid evidence that higher minimum wages reduce poverty.”

He concludes, “The desire to help poor and low-income families is understandable. But increasing the minimum wage is a misguided way to do it.”