A couple new government reports have focused on the well-being of children in the United States. The first one focused on adverse family experiences1 and discovered that those “children living with neither of their parents are 2.7 times as likely as those living with both biological parents, and more than twice as likely as children living with one biological parent, to have had at least one adverse experience such as those shown in the figure below.” 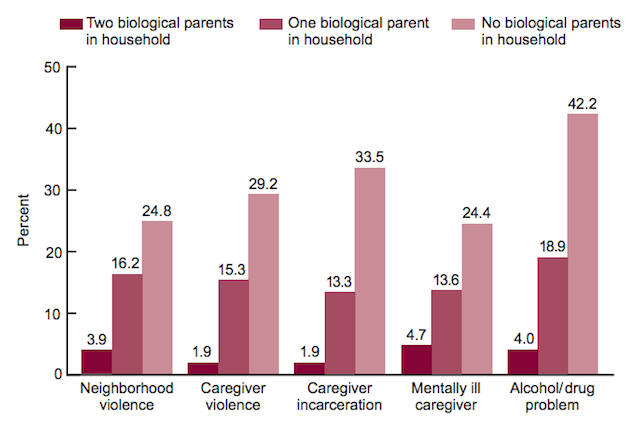 The second report provides a snapshot of children’s health in the United States and its relation to family structure. Overall, those in nuclear families (i.e. children “living with two parents who are married to one another and are each biological or adoptive parents to all children in the family”) fared better than those in other family structures. Children in nuclear families were least likely to be in “good,” “fair,” or “poor” health as opposed to “very good” or “excellent” health.

Data on chronic conditions and behavioral issues produced similar findings. “Although some confounding factors were controlled for…the researchers emphasize that since they simply measured family structure and child outcomes at a single point in time, their findings still cannot be used to make conclusions about causality. Prior research, they note, suggests that the arrow may go both ways…And obviously, family structure is one among many factors that matter for children’s health. In the CDC data, lower socioeconomic status (conditions of poverty or near-poverty, or parental educational attainment of no more than a high school diploma) was associated with worse health outcomes for children in every type of family, and sometimes it essentially drowned out the association between family structure and health. On the other hand, family structure and stability are associated with children’s health in many parts of the developing world, where access to health care is limited and where single-parent families are actually less likely than nuclear families to be socioeconomically disadvantaged. Teasing out all the determinants of children’s health will take more research than is currently available, but at this stage, family background seems in many cases to be one significant factor.”

Check out the full reports.