The Brookings Institution has a brand new study on those living on $2 a day in the U.S. One of the most interesting findings is how the estimates depend on the data source. These estimates range from 4% (12 million) to zero: 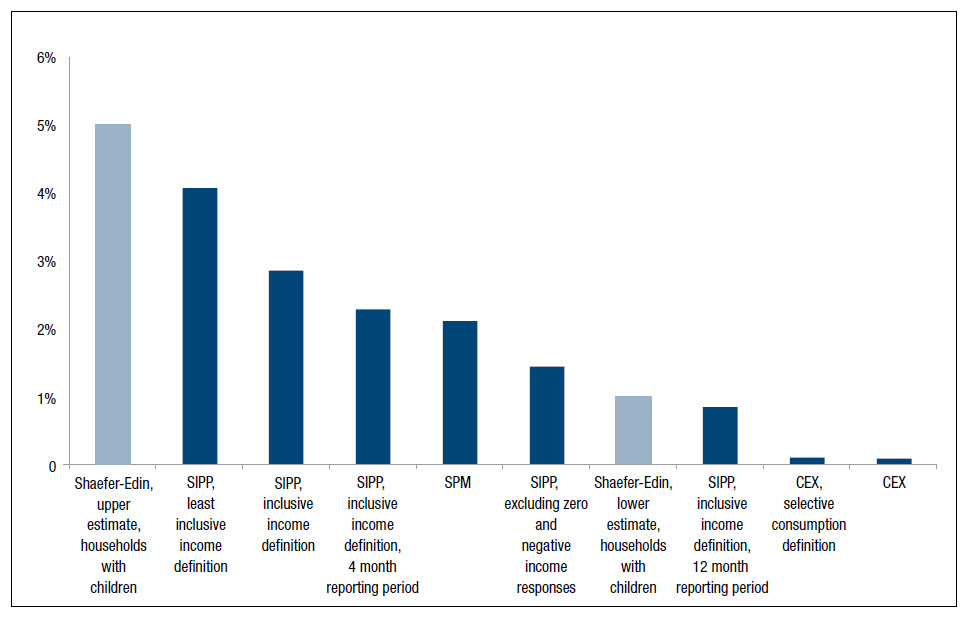 In response to questions about their study, the authors explain the range of estimates:

First, a significant portion of $2 poverty appears to be temporary, as evidenced by the lower poverty rates recorded when we extend the duration over which individuals’ welfare is assessed. Such spells may be accounted for by life events such as moving between jobs that are not necessarily indications of diminished welfare. Second, social protection programs play a critical role in the welfare of many of America’s poorest households. Programs such as food stamps (SNAP) and the Earned Income Tax Credit mean the difference between living above the $2 threshold or below it for millions of people according to some estimates. Third, a significant share of consumption for the $2 poor likely occurs out of resources that don’t count as income: savings and assets, borrowing, and in-kind government assistance. Poverty estimates based on income (money earned) and consumption (money spent) differ widely. This discrepancy is in keeping with the higher variability of income from month to month.

Furthermore, the authors explain, “If we used the exact same criteria to measure poverty in the U.S. as is used by the World Bank to obtain official poverty estimates for the developing world, we would conclude that no-one in the U.S. falls under the $2 threshold. Part of the reason for this is that even the poorest people surveyed in America appear to find a way to meet their most basic material needs (valued above $2 a day) even if their reported income is zero or close to zero. Furthermore, the poor in America have access to public goods—public education, criminal justice and infrastructure—that would be the envy of the poor in the developing world.”

Finally, the authors point out that “the methodology by which the World Bank compiles official global poverty estimates has recently changed. Whereas in the past the estimate was in practice just a measure of poverty in the developing world, the new method incorporates the populations of rich countries. For now, the entire population of these countries is assumed to not be poor.”

Understanding data sources is important. Consumption is likely a more accurate way to assess the poor’s material well-being, as I think is demonstrated in the range of estimates above. On top of this, one must take into consideration the intangible assets of one’s country. These assets, according to the World Bank, refer to the nation’s human and social capital (i.e. worker skills and trust) and the quality of its formal and informal institutions (e.g. efficient judicial system, property rights). These make up most of a nation’s total wealth.1 In 2005 (the latest data from the World Bank), the U.S. had $734,195 total wealth per capita, with $627,246 (over 85%) of that wealth being intangible.

One of those studies that should both remind those in developed countries how lucky they are and how much work there is still left to do.