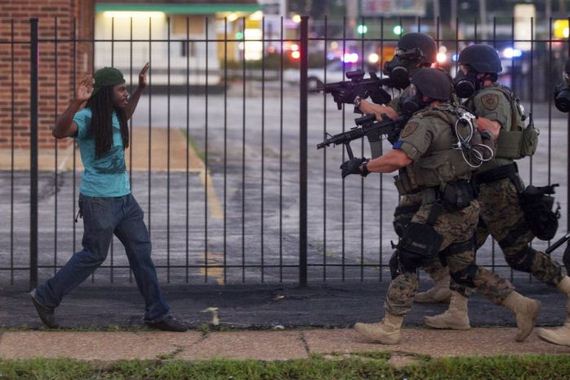 A lot of the writing that has come out since Ferguson has focused on the disconnect between anger in black communities and apparent indifference in white communities. A lot of these articles have been unhelpful. They start with the premise that Michael Brown’s shooting was obviously illegal and immoral when the reality is that we don’t know. There are reasonable grounds to suspect the shooting was justified. From that erroneous premise, these pieces quickly conclude that the only reason for white people to remain silent on the issue is cowardice, racism, or both. This is unfair, often self-righteous1, and never helpful.

The problem, I think, is that the shooting of Michael Brown was just a spark that ignited a powder keg. As a symbol, it’s potent, but in terms of understanding the real problem it’s a distraction. Not only because the events are unclear, but also because it puts focus on police-community relations, which are a small part of the real problem: the larger relationship between municipal governments and poor communities. The best article I’ve read on that is the Washington Posts’s How municipalities in St. Louis County, Mo., profit from poverty. The story is relatively simple: fairly innocent violations that would be a speed bump to someone in the middle class are much more disrupting to people who don’t have the same kinds of safety nets and flexibility. These folks are easily trapped in a cycle of violations that are too expensive (literally, in terms of dollars) for them to escape. Meanwhile, the local governments profit from the unending cycle of fines and fees: “Some of the towns in St. Louis County can derive 40 percent or more of their annual revenue from the petty fines and fees collected by their municipal courts.” Read the article, however, to truly understand the scale and perversity of the parasitical relationship between local governments and the populations they are supposed to serve.

It’s a serious problem and a serious injustice that underscores another criticism that I’ve seen liberals make of social conservatives. For all that social conservatives are worried about federal overreach, it’s historically federal or state governments that have stepped in to stop injustice perpetrated by state and local governments. Fear of federal tyranny seems utterly inexplicable in communities that have a history of seeing federal law defend them from local tyranny. Perversely, it doesn’t help that conservatives do see an issue to be angry about in Freguson: the violent initial overreaction of local police to peaceful protests. Militarization of local police is a serious concern, and the fact that conservatives see something legitimate to be upset about can make them all the more mystified when that concern is not acknowledged or shared by liberals.2This isn’t to say that liberals ignore police militarization, but they certainly don’t seem to see it as fundamental to the Ferguson story./3

It’s an old story, really. Both sides have points, but they fail to apprehend each other’s respective points of view. It is deeply unfortunate that sensational, random, tragic stories–like what happened to Michael Brown–seem to be the only thing that gets people talking. It’s not really a conversation when both sides are talking past each other.