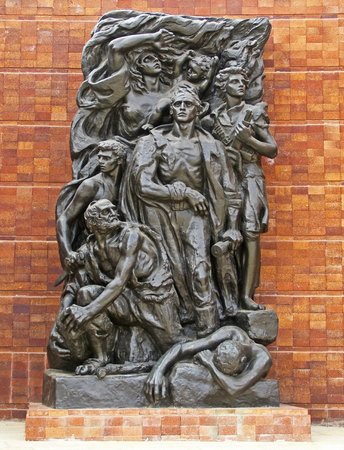 Today marks the 74th anniversary of the Warsaw Ghetto. Warsaw had been home to vibrant Jewish culture, religious and secular. Before the war’s outbreak, 30 percent of the population was Jewish. The ghetto was set up in order to better control and contain the Jewish population before deporting it to death camps.

I have a personal interest in the Warsaw Ghetto. As far as we know, all of my Dad’s side of the family that remained in Europe perished in the Holocaust. That, however, was much further south, in Bukovina. My interest in the Warsaw Ghetto comes from a couple of different things. As a child, I had some wooden trains made by a survivour of the ghetto who lived on a kibbutz where my Mom had volunteered in the 70s. Then, in high school, I participated in a program where a mixed group of Jewish and Arab youth engaged in dialogue about current politics, while learning about the Holocaust in a museum that emphasized two aspects- children’s life, and armed resistance. At the end of it, we were certified as guides in the museum. Due to transport issues I was never able to fully take advantage of the opportunity, but the interest in the Warsaw Ghetto has remained with me.

Here are the stories of three individuals from the Warsaw Ghetto. All three were killed, but each one tells us something a little different about what the Nazis tried to, but could never destroy.

Janusz Korchak was a pioneering pedagogue, children’s author, and orphanage director. Because of his professional fame, Korczak had the chance to save himself, but refused to abandon the children of his orphanage.

Mordechai Anielewicz formed an armed resistance group in the ghetto. The Warsaw Ghetto Uprising came as a nasty shock to the Germans, convinced as they were that the Jews were broken and defeated. The liquidation of the ghetto that should have taken three days, took instead a month, and the uprising inspired further resistance.

Hillel Zeitlin was born into a religious Jewish family, but abandoned religion in his youth before undergoing powerful spiritual and mystical experiences that caused him to regain his faith. He died at age 71 proudly wearing in a prayer shawl, and carrying a volume of the Zohar, the preeminent work of Jewish mysticism.

Grim Sunday reading, I know, yet these three things are beautiful beyond words. To love others when you must pay the ultimate price for it, to refuse to remain passive while people being murdered or wronged, and to devote oneself to God even in the depths of despair, that is kind of what Sunday is all about.