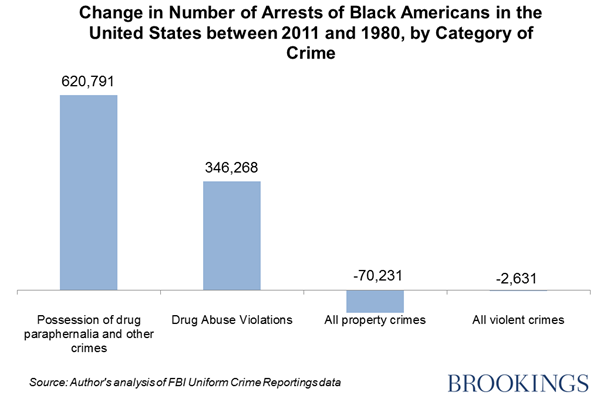 As the arrest data above shows (provided by Jonathan Rothwell at the Brookings Institution), arrests of blacks for violent and property crimes have dropped since 1980. However, arrests for drug related crimes have spiked dramatically. Yet,

whites are actually more likely than blacks to sell drugs and about as likely to consume them.

Whites were about 45 percent more likely than blacks to sell drugs in 1980, according to an analysis of the National Longitudinal Survey of Youth by economist Robert Fairlie. This was consistent with a 1989 survey of youth in Boston. My own analysis of data from the 2012 National Survey on Drug Use and Health shows that 6.6 percent of white adolescents and young adults (aged 12 to 25) sold drugs, compared to just 5.0 percent of blacks (a 32 percent difference).

Incarcerations wreak havoc on family stability, employment prospects, and future income. While there are other important factors that negatively impact black social mobility, an unnecessary War on Drugs is one we can easily address.