The Center on Children and Families at the Brookings Institution released a new report titled The Character Factor: Measures and Impact of Drive and Prudence. Using the Behavior Problems Index (BPI) hyperactivity scale in the National Longitudinal Survey of Youth, the researchers found that character traits such as drive1 and prudence2 are related to educational attainment in similar fashion to that of cognitive skills. Or, as the graph below demonstrates, character matters as much as book smarts. 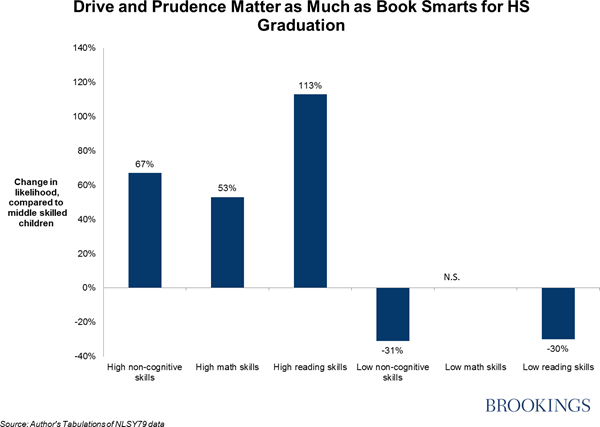 Check out the entire report and see why economic historian Deirdre McCloskey praises prudence as a virtue:

…Prudence is a virtue. We have been inclined for some centuries now in the West to relegate prudence to an amoral world of “mere” self-interest. This has been a catastrophe for our dear economics. Only a disposition to take care of others is construed as “virtue,” and then for its intentions rather than for its practical effect. Having good intentions in one’s heart is said to be virtuous, even if the intentions when carried out (such as high-rise public housing along the Dan Ryan Expressway or the war on drugs brought onto the streets of Watts and East LA) do not quite deliver as intended. And surely, as we in European culture have been saying for a long while, knowing how to take care of oneself is hardly a virtue?

Yes, it is. And so is the correlated carefulness in “helping” others: the Love or Justice moving us to help others is a vice, not a virtue, when unalloyed with Prudence. Knowing that one must put out a candle before leaving the house is a good thing, even if you didn’t mean to burn the place down, even if your intentions were pure, even if it was your own house to dispose of.

Imagine a community filled with imprudent people, Mary Tudors in bulk, and you’ll see the virtuousness of prudence. Such a community is not difficult to imagine-a community of small children would fit the bill, as in The Lord of the Flies…We labor to teach our children and adolescents and our dogs and, yes, ourselves the practical wisdom that keeps them and us from injuring or impoverishing themselves and others and ourselves. An imprudent person, someone who does not know the value of money and how to keep accounts, for example, is a menace to his friends and family, and to his fuller self. He may be chivalrous in some sense, courageous and temperate and just, even great-souled, as Aristotle wished, or loving, as did St. Paul, yet a fool, and not virtuous as a whole, tragically-or comically-flawed, as most of us are, short of King Arthur or Cardinal Pole. Thus for example Don Quixote.