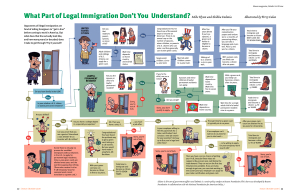 I’ve blogged before about the benefits of immigration reform and (more) open borders. I also think our path to citizenship is a mess. So, my initial reaction to the President’s announcement regarding immigration was mixed. Peter Suderman at Reason has a pretty balanced take on why my reactions were mixed. In response to the claims that President Obama’s actions are “unprecedented and illegal,” Suderman notes the following:

1. Probably legal: “As Reason’s Shikha Dalmia and Case Western Reserve University Law Professor Jonathan Adler have noted, the president has a great deal of authority to set enforcement priorities and exercise discretion when it comes to immigration law. Even some of the loudest critics of Obama’s action have come around to the idea that, at least technically, it would not exceed the president’s discretionary power, even if it would constitute an unusual and strained use of it.”

2. It is unprecedented: “The administration and some of its supporters are arguing that various presidents, including Republicans, have taken comparable steps before, limiting deportations through executive order, and that makes this well within political norms. This argument leaves out crucial details about congressional involvement and support for those previous presidential orders.” These crucial details have been well-documented by David Frum at The Atlantic.

3. It is a further expansion of executive power and the norms around using it: “Just because an executive action is technically legal does not mean that it falls within legal norms, and executive power can be expanded not only through explicit assertions of previously off-limits authority, but by making use of powers that existed but were never used, or never used to such an extent…Anyone who worries about executive overreach, even those supportive of expanded immigration, ought to be wary of the precedent this move, and the thin line of reasoning behind it, could set.” Expanding the power of one man should be troubling.

4. Executive action may be preferable to reform bill: “If you favor making immigration easier and more straightforward, and think that draconian enforcement efforts are both wasteful and counterproductive, then there are real upsides to executive action when compared to a big congressional overhaul.” Increased border control funding and an “incredibly invasive form of workplace nannying which would create huge hassles for workers and employers, as well as large numbers of false positives—making hiring, and finding employment, an even harder process than it already is.”

5. Executive action could poison broader, more stable reform: “There’s no question that the immediate political consequence would be to further outrage Republicans, and turn a party that has long had a mix of views about the virtues of expanding immigration into one dominated by opposition…But the backlash might not just be the immediate consequence, and it might not just be limited to the congressional GOP and its core supporters; unilateral action might result in a deepened long-term opposition to greater immigration as well.” I highly doubt this has anything to do with the morality of immigration. It is likely nothing more than a political move meant “to provoke Republicans into a frothing rage, in hopes that they will do something politically stupid as a result. (They might oblige.)”

This is not to simply condemn Obama’s plan, but instead to warn enthusiastic supporters that the choice to act at this time, in this way, without legislative backing or public support, might be satisfying in the moment, but also stands a real chance of closing off opportunities for a better, more lasting solution at some point in the future. Consensus is hard, and sometimes it seems impossible, but in politics, it’s also important.