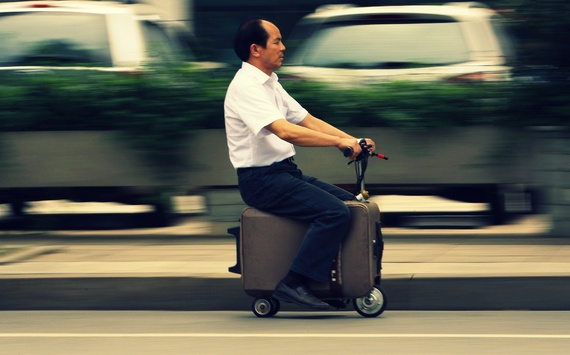 I got about half way through this article about the fastest way to board airplanes when I read this line:

The same optimization routine that can solve the traveling salesman problem can be applied to airplane boarding. Drawing from its results, I’ve proposed an optimum boarding method. In this approach, often called the Steffen method…

My first thought when I read this was, “The author of this article better not be named Steffen.” He is. My second thought was to point out the passage to my wife, and say, “Please never do that when you’ve got your PhD.” She just groaned and rolled her eyes. Trying to get people to accept a theory or a method based on your own name is the academic equivalent of trying to give yourself a nickname. Not only will it not help matters, it’s just not done. If the method or the theory is awesome, it will be named after you. Maybe. That will actually depend on whether or not you have cadres of extremely loyal grad students and/or other ardent supporters not yourself who will go promulgate the name on your behalf. Most importantly, however, if the method or theory isn’t awesome, it’s not going to be named after you or anyone else. And this theory isn’t that awesome.

In field tests, this method has outperformed all others. In a test with 72 passengers it was nearly twice as fast as boarding back-to-front or in rotating blocks of rows, methods commonly used in the industry. It was 20 to 30 percent faster than more-optimized boarding methods such as random boarding, when people get on without regard to where their assigned seats are. It also beat boarding windows-middle-aisle. My method even outperformed the industry gold standard of open seating, used by Southwest airlines. That’s when passengers don’t have assigned seats at all.

First, if Steffen says his method outperformed Southwest’s method (no assigned seats) but doesn’t provide a number, I’d guess it was by less than 20%.1 So you get an improvement of 20% (or less) in exchange for a boarding pattern that looks like the image to the right. The thing to notice there is that the first person who is seated (bottom right, which corresponds to the rear right of the airplane) boards 24 spaces ahead of the person they are sitting next to.

Think about the way people travel. When it’s in pairs or groups, they like to sit together. In order for this to work, you would have to line up with 24 people (or more, depending on the size of the plane) between you and the person you’re traveling with. If it’s your spouse and you want to be together, that’s a mild annoyance. If it’s a child or someone who needs even a little bit of help, that’s a pretty serious issue. And even if it’s another adult, there are still going to be all kinds of problems with who-carries-what. Not to mention people will game the system so that the person who goes first is going to be the one who carries all the carry-ons to get them stowed.

All methods have drawbacks, and I’m sure Steffen’s method probably isn’t worse, in aggregate, than other methods. But, in my humble opinion, that inconvenience of breaking up parties of travelers (in addition to the headache of keeping your passengers in exact order) probably outweigh the 20%-or-less time benefits.