Earlier this morning, a tense standoff in Australia ended in gunfire. A single hostage-taker initially held 17 hostages, of whom 12 had been released. When police heard gunfire inside the building, they responded immediately. The hostage taker and two hostages are dead. Three people are injured, including one police officer. All this info comes from an ABC News article, which also includes an apparent connection to radical Islam:

Two people inside the cafe were seen holding up a flag with Arabic writing on it that has been used by extremists in the past — raising fears that a terror attack was unfolding in Australia’s largest city.

Also this morning, I found an article with the headline: Australians Just Showed the World Exactly How to Respond to Terrorism With #IllRideWithYou. The article describes the origins of the #IllRideWithYou hashtag in which Australians are volunteering to accompany Muslims who wish to wear their religious clothes (e.g. hijab) on public transportation but are afraid of animosity or retaliation in the wake of the hostage crisis. The pictures–and the sentiment behind them–are noble and touching.

I agree with the idea of #IllRideWithYou. Even if you take–simply for the sake of argument–the strong and controversial position that the scripture or theology of Islam tend towards violence, it does not follow that all Muslims are violent. So, even in this extreme case, the correct response to peaceful, law-abiding Muslims is support and compassion.

But I do not agree with the headline. This is not the one true correct way to respond to terrorism. There are two correct responses. #IllRideWithYou is one half. Here’s what the other half looks like: 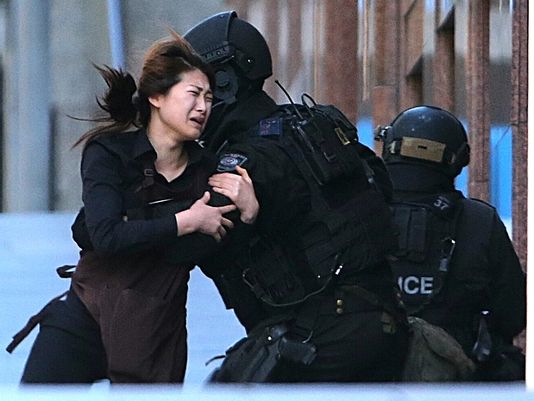 That photo1 shows one of the hostages running into the arms of a police officer moments after escaping the chocolate store through a side entrance. As lovely, as beautiful, and as necessary as the compassionate outreach of Australian commuters may be, none of that was what you would have been praying for if you were a hostage or had a family member held hostage in that store. There is also bravery and even love in the willingness to use violence–and be subject to the threat of violence–in lawful defense of the innocent.

A courageous and just society needs both of these responses. Not just one or the other.

This fits very nicely with Walker’s post from earlier today. He pointed out an article by Hernando de Soto in the WSJ arguing that–in the long run–you overcome terrorism not just with dronestrikes but also with economic development that gives people a better life.2 As coldly calculating as the discipline of economics and the emphasis on free markets may appear, a focus on economic liberty and investment and development is really nothing but a sincere and informed desire for other humans to prosper and draw closer to us in webs of trade, communication, mutual interest, and interdependence.

Love of fellow man doesn’t always look like what we expect it to. Sometimes it comes in the form of sympathetic hashtags. Sometimes it wears body armor and wields automatic weapons. And sometimes it spouts statistics, theories, and economic jargon. We need to broaden our concept of what it means to love if we are to love as expansively as these dark times require of us.