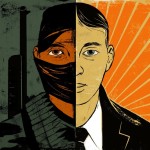 As the U.S. moves into a new theater of the war on terror, it will miss its best chance to beat back Islamic State and other radical groups in the Middle East if it doesn’t deploy a crucial but little-used weapon: an aggressive agenda for economic empowerment. Right now, all we hear about are airstrikes and military maneuvers—which is to be expected when facing down thugs bent on mayhem and destruction.

But if the goal is not only to degrade what President Barack Obama rightly calls Islamic State’s “network of death” but to make it impossible for radical leaders to recruit terrorists in the first place, the West must learn a simple lesson: Economic hope is the only way to win the battle for the constituencies on which terrorist groups feed.

So begins Hernando de Soto’s WSJ piece on economic freedom as a way to combat terrorism. He tells the fascinating story of his home country Peru and how it defeated the terrorist group Shining Path through a “new, more accessible legal framework in which to run businesses, make contracts and borrow—spurring an unprecedented rise in living standards.”

1 thought on “The Capitalist Cure for Terrorism”