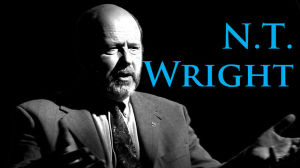 In a 2012 First Things piece, theologian Peter Leithart captures brilliantly what reading N.T. Wright does for one’s understanding of the New Testament:1

…N. T. Wright has spoiled every Jesus film. Once you’ve read Wright, you realize that none of the movies get Jesus right. Pharisees and scribes are reduced stock villains with caricatured Jewish features. Pilate has to make an appearance, and Herod, but we are given no sense that first-century Israel was the powder keg that it actually was.

…In the movies, Jesus is a hippy peace-child, a delicate flower of a man, a dew-eyed first-century Jewish Gandhi. Why would anyone want to hurt Him? Maybe because He’s so annoyingly precious; but that’s not the story of the gospels.

Just this year, I had another realization. N. T. Wright has spoiled Christmas too.

This spoilage comes from a contrasting of Advent and Christmas hymns:

Advent hymns, as you’d expect, are full of longing, and the language of the prophets. Advent hymns are about Israel’s desperations and hope, and specifically hope that the Christ would come in order to keep Yahweh’s promise to restore His people, and through them to restore the nations…Advent hymns are about Israel. They are deeply and thoroughly and thrillingly political. Advent hymns look forward not to heaven but the redemption of Israel and of the nations, the coming of God’s kingdom on earth.

…What did Jesus come to do? Listening to Advent hymns, you’d think He comes to restore Israel, comfort Jerusalem, bring light to the nations, to do some global geo-political restructuring. Listening to Christmas hymns, you’d think He comes to do something quite different…It’s as if the whole history of Israel has been bypassed. It’s as if Jesus was born just outside Eden, immediately after Adam’s sin.

…Biblical Christmas hymns are very, very different. They are explicitly rooted in the history of Abraham, Moses, David, exile, and the longing for return. They are overtly, even uncomfortably, political.

What [Wright] stole was a false Christmas, a de-contextualized and apolitical Christmas. But we shouldn’t have bought that Christmas in the first place, and should have been embarrassed to display it so proudly on the mantle. Good riddance, and Bah humbug.