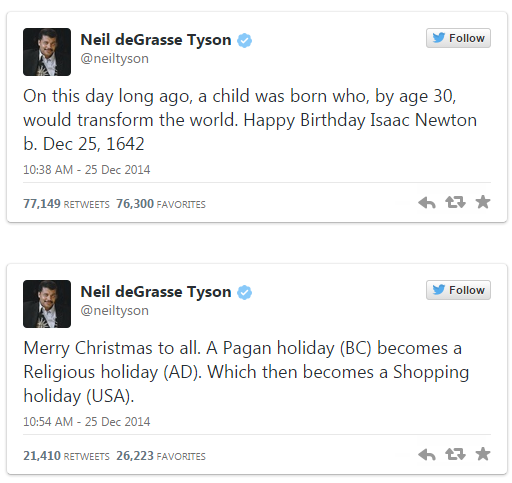 On the one hand, Neil deGrasse Tyson’s Christmas day tweets are the kind of obnoxious trolling that tends to give atheists such a bad name, so I could see if they annoyed people. On the other hand, as obnoxious trolling goes, these are pretty tame. I didn’t think he was being mean-spirited. I just thought he wasn’t being as clever as he thought he was being. Besides, I wrote about his bigger problems back in September, so I was going to just let these go by without comment. But then Ro sent me this article highlighting three unintentional ironies behind Tyson’s quote, and I thought it was definitely worth sharing: Neil deGrasse Tyson’s (Unwittingly) Ironic Trolling.

The main points are:

Check out the article for full explanations.